When anxiety catches up... 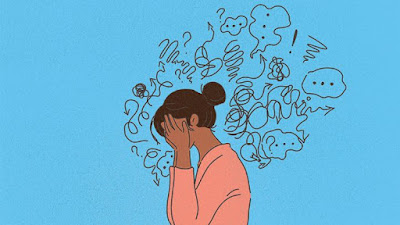 I promise I don't purposely abandon my blog for 3 months at a time, but sometimes life happens and my days are overcome with more pressing matters, although writing about those "matters" probably would help more than I'd like to admit.

I have a way of dealing with things; I am blunt, I don't mope, I tend to focus on problem solutions rather than problem analysis. I don't get too attached, or offended, or sad about things.  Some might call it "cold", others might call it "practical", either way, it's what works for me and I'm ok with that.

But because no one is invulnerable to stress and anxiety, my pragmatism can only get me so far and I too have suffered the effects of the uncertainty of these times, particularly when it comes to my two daughters. I've always been wary of the teenage years; the challenges that come with this stage of life are nothing to laugh about, especially during an era when they have access to insurmountable amounts of information and misinformation; it's hard to convince your child of something when the whole world tells them otherwise; it's hard to expect them to behave a certain way only because that is what has worked for us; it's easy to assume that their personalities will develop according to their surroundings and hard when we are faced with the opposite of that.

In the past few months, I've had to deal with teenage heartbreak (first boyfriend and subsequent break-up), isolation, panic attacks, anxiety, school neglect, a transition to high school, the realization that friends change and you can't possibly please everyone, therapy and much more; and even though these things haven't happened to ME, it definitely feels like I'm living them right along with my kids and that adds a whole new layer of complexity that I wasn't ready for. How could I truly understand all these things if it's not me they're happening to? and how could I truly help if I don't know what they really feel like?

My teenage years were a "walk in the park"; even though I moved to another country at the ripe age of 15, the fact that there were no phones and no way to bombard kids with "crap" probably made it a lot easier. Influencers, political correctness, #empowher, and the constant and exhausting need to prove yourself to others were not a thing and the world was a much happier place (according to my perception anyway!).  The amount of pressure modern kids have to deal with is no joke and that in turn translates into added pressure for us parents, it really is NO JOKE! Never in a million years did I think I'd have to fear my kid committing suicide because she was bullied online, or that I'd have to fight for my kids to have a "normal life", or that I'd have to convince them of things that at some point were so obvious, or the fact that therapy is probably a "necessary evil" if I want to come out alive on the other side. And even with all that, my kids have "easy" but it does come with a cost, and anxiety catches up because just when I think I've got it all figured out, in comes the next thing to worry about, the next threat, the next issue, the next pain...

I guess what I'm trying to say is that anxiety is REAL and sometimes I fail to voice it and wait for the triggers instead of finding a shoulder to cry on or calling on a friend for a venting session.  I know I'm not alone...