Memoirs of my life in the USA: Things were looking up...until they weren't

About 2 years into our new life, things were starting to look up. I had made some friends (some of which would become my lifelong best friends), my dad was already working in architecture, we had moved to a nicer area and were enrolled in a better school and I even had my first ever job, everything was definitely better.

Working as a teenager is not something I would have done had we stayed in Venezuela but I absolutely loved the fact that I could do it here; making my own money from the time I was 15 really taught me to be a hard worker and to value the effort that comes with it. I learned responsibility, work ethic, discipline, and many other skills that would prove useful in my adult life as well. I also bought my first car with my hard-earned money, so that was definitely a highlight of my first job!

See, coming to the United States was a CHOICE, there wasn’t a pressing financial or political reason to leave Venezuela at the time we did, we were just another family moving to a new country; I think my parents saw it more as a way for their children to grow up in a country with better opportunities all around, but the change did come at a price and I’d be lying if I said that even though things were better, it wasn’t a tough road. Choice aside, I am sure my sister Erika was a big motivator for that choice; she had been born in Texas in the late ’70s while my parents were in college and due to a case of medical malpractice, she ended up with mental retardation. Life in Venezuela wasn’t easy for her as a disabled person and I can imagine that it was very difficult for my parents to see her grow up in a place where there were no special considerations for anyone with her condition. In coming to the United States, my parents saw an opportunity for Erika to have a better life, to live in a place where she’d be treated humanely, somewhere she would be seen as a “handicapable” person and not some burden to society.  And that is exactly what we found here; great special ed programs, incredible doctors, the right medications, the right approach. And because Erika was an American citizen all of the immigration paperwork would be made easier for the rest of the family, there was a clear path for us to become legal permanent residents and subsequent citizens once Erika turned 21; meanwhile, my dad held a professional visa (we were his dependents) while we waited for her to reach the age where she could petition the whole family.

But that day never came because Erika passed away unexpectedly on December 23rd, 1998, a month before her 21st birthday; our life was changing again, our family was crushed.  Erika’s death is the single most shattering event we have gone through as a family; a part of us died with her and it took a long time for the devastation to set in and even longer for us to come out of it (not like it has ever been possible to feel completely normal again!).

With Erika’s passing came a lot of sadness, tears, setbacks, and a whole lot of reconfiguring of our plans and our lives in general. Our family was broken, our hearts were shattered and to add insult to injury, we had no place to go back to now because Venezuela was just starting its own nightmare with Hugo Chavez ascending to the presidency (if you know, you know!) and while I am sure my parents briefly considered the possibility of going back, the newly installed government quickly persuaded them to stay...and so we did.

I’d like to think that God used Erika for the very important purpose of bringing us here; it is no coincidence that her life inspired our move and the timing of her death cemented our stay.  I am thankful every single day for having had the blessing of Erika in my life; there isn’t a day that I don’t think of her and I know everything that happened was part of the plan... and broken heart and all we needed to start over… 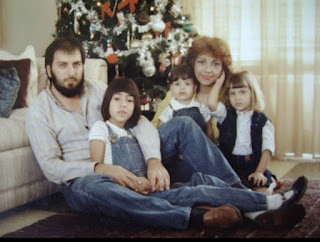 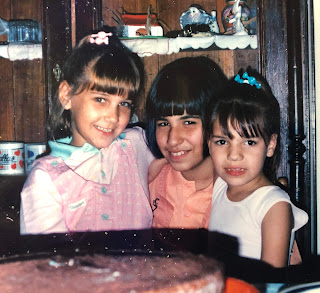 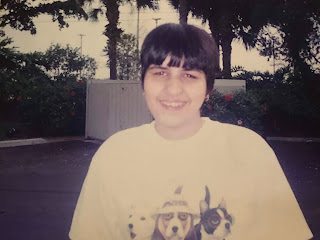 Memoirs of my life in the USA: How it started 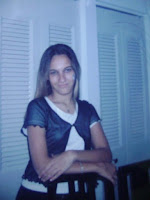 I was 14 years old when my mom propped an empty suitcase in front of me and said “whatever fits in here, that’s what you can take with you”...

Just a few months prior my parents had decided we were leaving Venezuela and permanently relocating to the United States, so while the suitcase scene didn’t shock me, it did feel like a turning point in my teenage mind...we were leaving.. I had been asked to pack...the move was real!

I saw my childhood home come apart when my mom decided that the easiest way to get ready for the move was to sell everything in the house and start anew. I remember very clearly when strangers would walk into our home and make offers on furniture, picture frames, kitchen appliances, even our Christmas tree ornaments were for sale. I spent the last few nights sleeping on the floor because my bed had been sold and celebrated my 15th birthday in an empty house blowing candles on a cake that sat on a kitchen stool, no bells or whistles, there was no time for a “quince” party, we were leaving the country within the next week!

On December 31st, 1996 we boarded a plane and said goodbye to our native country. I can still hear my sister Claudia sobbing at the airport and screaming “please don’t take me, I don’t want to leave!”, that moment will remain a jarring memory for me. It was the first day of our new lives and at the time it sounded odd that my parents had picked that day to move to a new country but 25 years later I can see why it was the perfect date; it meant closing a chapter and starting a new one along with ending a year and ringing in a new one, the meaning is deeper than I ever thought 25 years ago.

The first few months were rough as I navigated the American high school experience as a newly arrived international freshman. Leaving my all-girl Catholic school to be “dumped” in a less than desirable public American high school wasn’t my cup of tea and I felt really lost for most of that first year.  I was no longer wearing a preppy uniform every day, there were no praying nuns with cheerful attitudes or people willing to be friendly just because that was the right thing to do.  Instead, I was faced with unwelcoming mean kids that made fun of me for not speaking English and for not understanding their sexual jokes, teachers that were mostly disconnected from the students’ needs, and a high school campus that looked more like a jail than it did a school. I often wondered what I had done to deserve this and so badly wanted to go back to the bubble I had lived in for the past 15 years.

Things at home weren’t great either because we had gone from living a comfortable life in a big house to being crammed in a two-bedroom rental apartment. My dad was no longer Dean of Architecture in a prestigious university; he was now a pizza delivery driver trying to make ends meet and saving every penny so we could have a decent life as immigrants. My mom was no longer the always available stay-at-home mom, she was now another breadwinner and my sisters and I were spending more time alone than we ever had. Those first few months felt lonely and ominous, they brought so much anxiety and disruption to our perfect family but they also taught me the first lessons I learned in my new life as an immigrant, as the foreigner that I had become and the one I would always be. I learned that letting go of what was would be the only way to move forward, I learned that home is where your family is and that it is in difficult times that we truly understand the value of love, resilience, and sacrifice.

Our life in the United States was just getting started…(to be continued!) 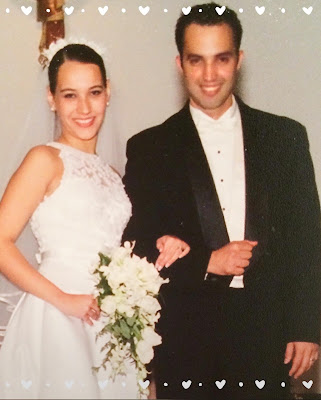 I love my husband unconditionally every day of the year but there is something about our anniversary that makes me sappy and overly giddy.

When I look at the life we have built in the past 16 years I can't help but think "gosh, how did I get so lucky!?".  And the "luck" I think about isn't about feeling a mushy kind of love every day, or never arguing about anything, or traveling together, or having healthy kids, or being able to afford a comfortable life. My "luck" is about having that one special person next to me when things don't go right, it's about knowing that even on the worst days we share a kind of love that we both guard more than anything else we have, it's about arguing and always finding a way back to each other, it's about being confident that no matter what, we'll always trust each other enough to see through whatever obstacle is thrown at us.

I am "lucky" to love a partner who loves me back just as intensely, passionately, and unconditionally as I love him. We are lucky to have each other to go through good and bad times; to celebrate the happiness and share the sadness, someone to be vulnerable around, always knowing that there will be no judgment, and having no doubts that God put us together for a reason, being certain that we have a purpose as a couple, as a family.

That's what our anniversary means to me, a reminder that the love we share is bigger than ourselves and that our marriage will always be worth fighting for!

I love you forever, my Iggy. Thanks for making me the luckiest girl alive!