Memoirs of my life in the USA: Official Silver Anniversary 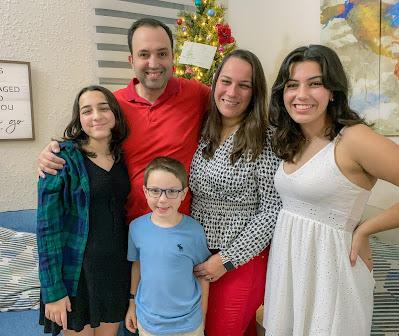 I left off my last post when a palm reader in NYC told me I would marry someone I hadn't met in exactly a year's time.  That happened exactly as predicted and I met Iggy a month later (December 2004), got engaged the following April, and married him on November 18th, 2005 aka the happiest day of my life.
I could write a long post about how our lives have unfolded in the past 17 years but the truth is that FB has been a witness of that and there isn't much to add, so in this post, I will focus on the unmeasurable gratefulness that I feel today on my official 25th year in the USA.
I will make it short by saying I LOVE everything about this country, in the past 25 years I have been given amazing opportunities and a life full of blessings. I have met the most wonderful people and made life-long friends that have taught me the most valuable lessons.
I LOVE the American way, I love the comfort that this country has to offer, I love the richness of every state, I love the customs, I love the freedom that we enjoy, I love the diversity that is found in the USA. I love that this country greeted me with open arms when I was an immature teenager and that it has allowed me to create a path for myself as an adult.
I am grateful for my family and for the fact that my kids get to grow up here, this is the perfect place for us, the place where we proudly belong.
I am thankful for the decision my parents made 25 years ago and I am proud to be an American.
I thank God every day for the USA and today I celebrate 25 happy years in one of the most amazing countries in the world!
Posted by Stories of a Happy Mom at 1:46 PM

Memoirs of my life in the USA: Time to be an adult!

When I graduated college, it was time to “adult”! Once I had accepted the fact that the USA was my new home, it was time to hustle.  A few visas later (and a lot of money in lawyer fees) I was already a permanent resident and was free to live my life as a quasi-American. My first job paid me a whooping $25K per year, not exactly what I had envisioned and I learned rather quickly that the lack of guidance in my pre-college years had led me to the wrong career. But I honestly didn’t have time to dwell on it and I really tried to make the best of it. I worked in the mental health field for a while and one day I got the weird itch to move out of my parents’ house and try my own luck.

In a spur of the moment decision, I broke up with my boyfriend of 3 years, got a job in Tampa, rented an apartment, packed up all my stuff and left. When I look back on it, I think moving to Tampa was probably a crazy decision but at the time I felt right; it was something that was part of my process, something I needed to do. Even though most Hispanic families don’t see their children leave home until they get married, I was unknowingly raised as an American, with "American" thoughts and I was starting to realize that it just seemed “normal” to me that someone at 22 would leave home to live on their own. I often wonder how much longer I would have lived at home had we not come to the United States; I’m sure it would have been at least until marriage, maybe even beyond.

Emotionally speaking, my life in Tampa was a hot mess; I felt so lonely all the time and sadness always overtook whatever I was doing.  My life was monotonous and the job I had was mediocre at best. Yes, I was working in corporate America, meeting new people and performing well, but this lonely, corporate-like life was not what I wanted for myself. And while I didn’t love it, the idea of feeling like a failure and going back to my parents’ house was even less appealing because I had already come out from under their wing and flying back to the nest didn’t exactly spell “success” so I stuck it out for a couple of months.

By the 2nd month in Tampa, I was ready to throw in the towel; living alone was definitely not for me. I know it sounds extreme, but I literally used to cry myself to sleep 5 out of 7 days of the week; there was something about my “pretend” life dream that was making me borderline depressed. I view my time in Tampa as an out of body experience because now that I’m almost 40 I can’t really see myself living alone in another town. I made some good friends and experienced a lot of growth in my time away from home but in the end it just wasn’t enough to keep me where I was. I often wonder if I should have given the Tampa life a little more time, but if I had, I wouldn't be who I am today so I really have no regrets.

And just like I had decided to move out of my parents’ home, I decided it was time to go back, time to swallow my pride and save myself from making even more mistakes and living in perpetual depression and agony. A couple of weeks before I made the choice to scrap the “I’m ready to live alone” idea, I was hospitalized for some sort of severe food poisoning and found myself lonely in a local hospital; no one to call, no shoulder to cry on, no one to help me pack my things in a patient bag; I missed my mom and dad, I missed my sister and my cats and everything that had to do with a warm and caring family and stable home life. That hospital stay was probably a turning point for me and I’m glad I followed my heart and decided to go back home.

But before I moved back, I took a girls’ trip to NYC with my cousin Carolina and my good friend Eva. It was supposed to be a cathartic experience for me and it certainly was, the trip served as a time for me to reflect on regrets, changes, future decisions, growth, etc.

As we were walking around NYC one day, a strange looking lady grabbed my hand and said she wanted to read my palm. Me, being the  skeptic I am, quickly shook my hand away and said “no, no, no!” and she kept insisting that I let her tell me about my future.  I kept brushing her off and she followed me around for a bit until I finally agreed to let her tell me ONE thing. She said it was something that had to be said because she had a strong feeling about it.  It was November 18th, 2004 and her exact words were “in exactly ONE year from today, you will be marrying a man you haven’t met yet and he will make you very happy, continue to follow your heart”.  Of course I thought she was crazy, I was 22 years old and I wouldn’t call myself a romantic; marriage was definitely not on my mind…

Memoirs of my life in the USA: Moving on...

Losing my sister during my junior year of high school definitely put a damper on the experience. There I was, navigating life in a foreign country, in a brand new high school with a newly shattered family. While I did try for tragedy not to define who I was, seeing my parents (particularly my mom) go through such a terrible loss was definitely a challenge. I felt lost in high school; while other kids were starting to shop around for colleges, write exceptional essays and plan out their potential careers, I was trying to figure out how I was going to move forward with a broken heart and an uncertain legal status.  I was a good student, a great one actually; grades were never an issue for me but I definitely did not find the support and guidance I needed to catapult me into a stellar college experience. My parents had no clue about what was required and they weren’t involved in the process; on top of that, my sister dying showed us that our immigration challenges were just starting, and having a non-resident visa not only meant that I wouldn’t be eligible for any scholarships I’d earned but also that my parents would have to pay top dollar at any college.

And that’s exactly what happened, my grades afforded me any scholarship a highschooler could dream of (I was at the top 5% of my class, out of 1200+ students) but I could not take any of them because I was, well, a foreigner; one that didn’t qualify for the “perks” America had to offer, the very things my parents had moved here for, but such was life and we couldn't dwell on it. I ended up attending FIU and finished my Bachelor’s degree in Psychology in 2.5 years; I will be forever grateful for the financial sacrifices my parents made so I could graduate college.  They paid upwards of $7K per semester and I can only hope I made them a little proud with my efforts because I know how difficult it was for them at the time.

Even though my college experience wasn’t what I once envisioned (I was a commuter student, never attended football games, or college parties, didn’t join a sorority, didn’t have a college sweetheart, and had very few friends) it was the experience I got and for that I am grateful.  Would I have moved away from home had my situation been different? Would I have left Florida to settle elsewhere? Would I have chosen FIU had that not only been one of my few choices? I honestly don’t know but at the time I was happy to play the cards I had been dealt and I decided to make the best of it and I got a degree out of it, so it was definitely a win!

I learned a lot in my college years. I learned that dreams can change and our ability to adjust and make lemonade out of life’s lemons only improves if we really want. I learned that nobody could live life for me and even though settling might seem easier at times, sometimes the road less traveled is the one that brings the most happiness. My parents' dedication to us was once again proven and their resilience is truly admirable; their example is one of the best lessons life has given me.

I realize as I write, that this particular part of the story may sound a bit gloomy, but college was a really good time in my life; even though there was a lot to be sad about, I loved every minute of it.  I grew so much as a person, I learned empathy, I made friends, I learned balance and prioritizing. It was during college that I had my first real relationship, my first conversations about conviction and so much more.  And many people may argue that’s exactly what college is for but in my case, it was special because it was the time I came out of my shell and realized that I was here to stay, that the United States was my new home for real and it was time to love it as my own because it would be here that I would likely grow a family and pursue my dreams with them….and that I did!