I haven't blogged in almost 3 weeks and last time I posted a pregnancy update, I was 20 weeks along, so it's fair to say that this one is long overdue!
Up until a few weeks ago, my pregnancy had been rather uneventful (thank God for that!) but in the past few weeks being pregnant hasn't been THAT much fun!
Here's the low down.... at around 23 weeks I started having terrible sciatica pain; it was so awful I couldn't walk and I was in tears every time I had to turn in bed or when I had to do whatever (minor) effort.  Following the insistence of my husband and a few friends, I started seeing a chiropractor 3x per week and he definitely helped a lot!  Then at around 25 weeks, when I though the pain was taken care of, my body decides to come up with a NEW kind of pain... this time it was "round ligament pain"; I swear I thought I was going to die. It was so bad that I ended up in the ER fearing appendicitis or who knows what issue from hell; it turns out (according to the ER nurse) I was "lucky" on my previous pregnancies for not getting this *very common* symptom, which apparently (and just like everything else in pregnancy) is NORMAL! Ugh!
Ok, so there I was, just trying to get by and dealing with sciatica pain and round ligament issues when nausea and vomiting decide to come back full force...to make things a little more fun! So I basically puked every other night for about a week, which apparently is also NORMAL! But hey, at least I could be sure that baby was growing strong and healthy, right?!? :)
Fast forward to week 26 and it was time for the Glucose Tolerance Test, which I FAILED! ugh! Now I have to do another test, which lasts 3 hours just to make sure I don't have gestational diabetes. I really hope I pass this one because I don't want to finish my pregnancy with insulin and special diets (fingers crossed!)
So just when I was getting over the disappointment of having failed my sugar screening and enjoying the last day of vacation, I fell down the stairs at my brother in law's house in Ohio and almost broke my foot! Thankfully, I fell in such a way that I protected my belly and the baby was safe the whole time.  Too bad my foot wasn't as lucky! I ended up in the ER (again!), got a boot and every possible medical equipment to help me move around. I was completely confined to my bed for 5 days and even though I'm still in pain and it will take time for my foot to heal, at least I am mobile now and getting my independence back!
Here's a couple of belly pictures from the last two weeks! 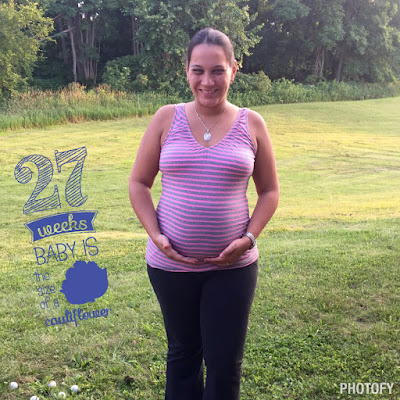 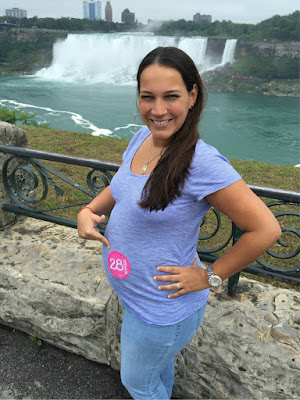 With all of that said, I still feel very blessed that my baby is growing fast and healthy and my pregnancy has progressed without any major/real issues.  I have gained a total of 6 lbs and the baby is measuring right on track for his 09/30 due date.  Emotionally I still feel a little insecure at times and even fearful that this is all happening so fast, but I know God has a plan and He chose me to be the mother of this baby and that means the world to me!