I've slacked majorly with writing about our recent trip to Europe, but I will go ahead and post Part 2 of it because I want to remember every little thing in a few years and this is a great way to do that!

The third city we visited was Vienna, Austria, which is probably the most regal of all the places we saw so it was a good contrast because it is also such a modern yet classic place; we really enjoyed our stay in Vienna.
Vienna was SO clean...probably one of the cleanest places I've ever seen which made it such a "walkable" place and very easy to navigate.  By the time we got to Vienna, the weather was already warming up and the days were the most perfect. This city was also the most expensive one of all and probably the second (after Budapest) with less people willing to speak English so Iggy got to practice some of his German skills, which was very fun to watch to say the least! :)
I also noticed that Vienna was the most diverse city, as far as nationalities and cultures observed.
Here's Iggy in front of our hotel... 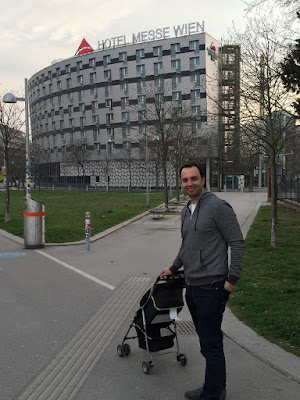 Again..tour buses were a hit; the ones in Vienna were specially clean and organized.. we really loved them... 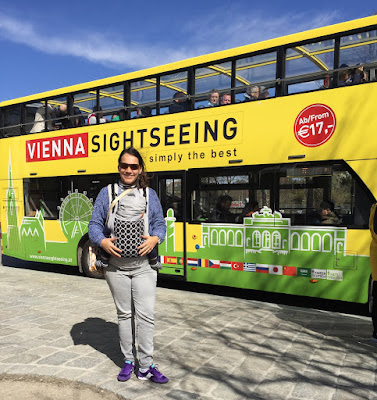 Here we are at the famous Belvedere Palace, such a beautiful place filled with so much history... 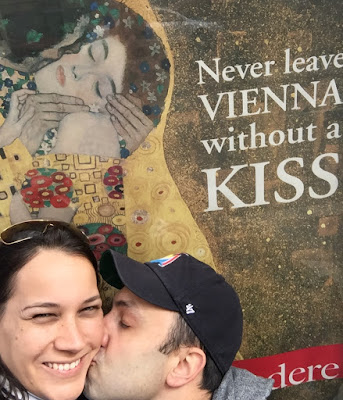 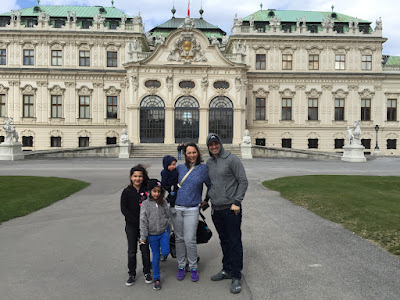 I love this picture of the kids at the famous Belvedere Gardens, a very kid friendly spot.. they had so much fun running around this historic place. 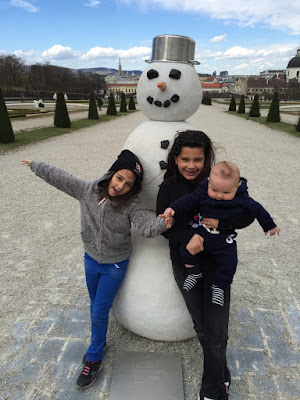 Here's Gaby and I at Schwarzenbergplatz, a very beautiful spot in Vienna with one of the biggest fountains in the city... the day was simply amazing... 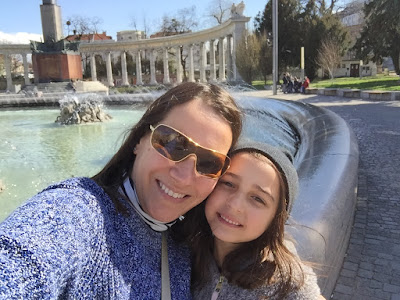 Oliver really enjoyed the tour buses, he was so chill the whole time and even  used the headsets at some point... 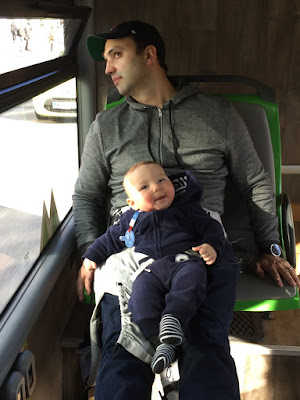 And I just love this picture of the famous Prater in Vienna, a hot spot for both tourists and locals.  If you ever visit this wonderful city, don't miss this peculiar attraction which features hundreds of attractions, stores and restaurants.  We really enjoyed our time there... 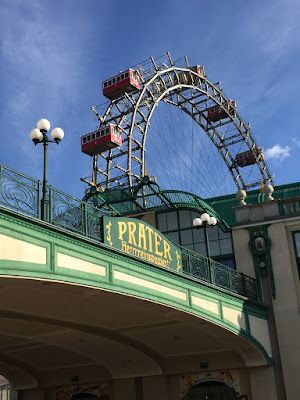 After Vienna, we headed to our final city, the wonderful Budapest. I will admit to the fact that my expectations for Budapest were the lowest and I only added this destination to our itinerary because it made our trip cheaper (go figure!). By the time we had to go to Budapest, the kids were already tired of trains, hotels and planes and were asking to go home but the prospect of a new city excited all of us and we HAD to visit anyways because that's where our trip was supposed to end.
And let me just say WOW! I simply LOVED this place and (after Prague) it was my favorite of all. I had heard Budapest is a "magical" place and no words can describe how beautiful it is and how glad I am to have had the opportunity to visit it. 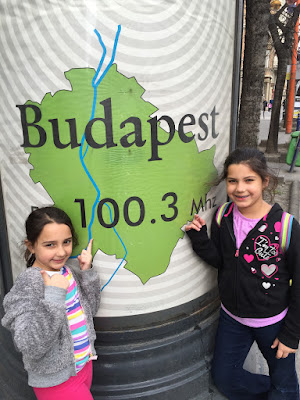 Budapest had the BEST food of all places and we were lucky to try some typical dishes such as Langos, Goulash, potato pancakes and many more. I really love how my girls (especially Olivia) are so adventurous when it comes to new foods; some of these new flavors were simply fascinating. 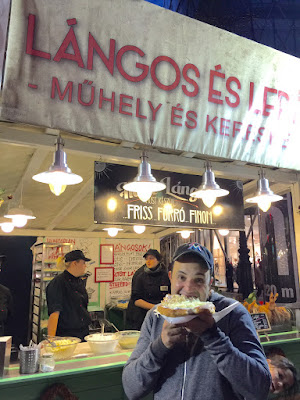 Budapest also had the best weather of all four cities; we were able to take off our sweaters and walk around without being cold. The architecture was impressive and we specially enjoyed our visit to the Hungarian Parliament building, which is the 2nd largest in Europe (after the English Parliament in London). Here's a family picture at the Parliament. 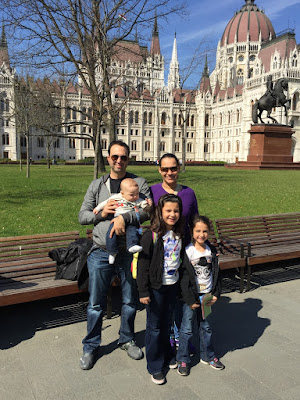 Family enjoying a nice walk in Budapest... Iggy was a champ at baby wearing.. go daddy! 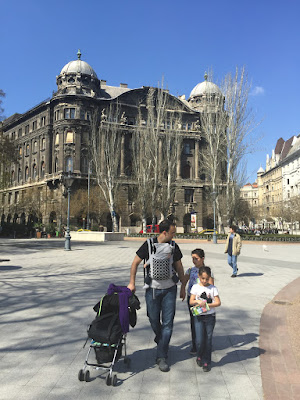 Here are the girls in front of the famous Bridge of Chains, one of the many bridges that connect Buda to Pest... 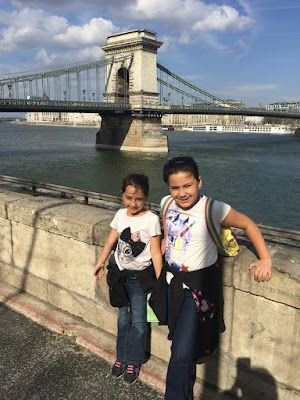 We went on the funicular to the Buda Castle and enjoyed some of the most amazing views of the city. 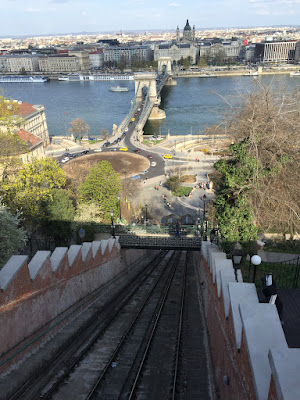 Here we are on our Danube River cruise, which allowed us to tour the whole city via boat and was the perfect addition to our trip...
Not many people spoke English in Budapest so communicating was a bit more challenging. The city was fairly cheap because Hungary has its own currency (the Forint) and the exchange rate was very beneficial to us... 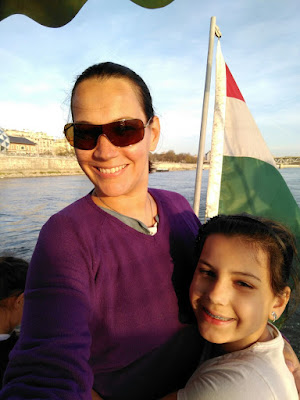 And as a bonus, here's a couple of pictures of Oliver on the plane during our last flight (almost 13 hours long!). By the time we were on this flight, he was SO done! He was tired and cranky but even then he was able to keep it together for the most part... such a good boy! 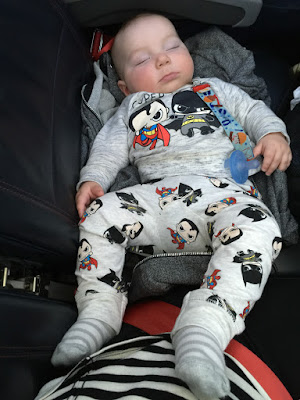 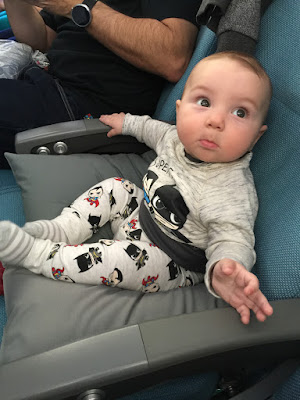 Some of the things I learned about traveling with a baby (or traveling in general):
- Pack light... as light as you possibly can. All our train transfers and adventures were slightly easier because we didn't bring unnecessary things and I still believe we could have done better.
- Baby wearing is the bomb! Because we brought our Tula carrier, it was so much easier to haul Oliver and the kids around; he would sleep and eat in the carrier and we walked a lot faster when we didn't have to push the stroller
- Bring a SMALL stroller if needed. Before I went on the trip, a friend of mine suggested a cheap tiny Walmart stroller, which was probably the biggest hit. In my mind, I would be able to dispose of it had it become an inconvenience (it was $20). We didn't have to get rid of it so that's a good thing!
- Pack lots of snacks!  Trains snacks can be expensive so packing some kid friendly snacks is a must if you want to avoid overspending.
- Drink LOTS of water. Walking around can be so exhausting and getting dehydrated is always a possibility so carrying water bottles around is imperative when touring big cities.
- Have pocket change and cash in hand. There's a lot of "cash only" places/stores in these cities so carrying some cash allows for easy shopping and less frustration in case you really want to buy something at some of these spots...and have change for the restrooms too, because most of them have a fee!
- Plan your days but allow for flexibility.  The truth is, kids get tired and there will be days when they're not up to a jam packed itinerary so it's always a good idea to have some flexibility and understand that a slower pace might be better some days but have some plan anyways.
- Check the weather daily! Weather can be very volatile so knowing what kind of day is ahead is crucial when planning your daily attire.  There were days when we didn't check and we were stuck carrying heavy coats that weren't necessary or needing an extra layer that we didn't put on.
- Buy souvenirs throughout!!! Lots of friends and family really appreciate small souvenirs so buying little things every day will make it easier so you don't have to rush at the last minute. There are lots and lots of souvenir stores in Europe and they feature the cutest little things so shop away!
- Take LOTS of pictures! I'm sure everyone agrees with this one but I feel compelled to remind you. Besides your mental images, pictures are the only tangible memories to bring back from a trip.  It is such a pleasure to look back at pictures and reminisce of wonderful times.

I feel so blessed to have had (yet again!) the opportunity to travel with my family. And since some people were asking, I will say that I don't regret taking Oliver and even I got so many comments on how "crazy" I was to take him on such long trip, I am so happy we did because even though he won't remember this trip one bit, the rest of us will and that is something that nobody can take away!
Looking forward to our next trip and I hope you enjoyed reading our tales from Europe! ;)