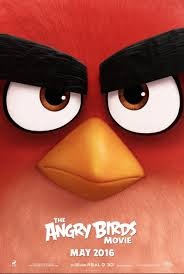 This weekend we watched "The Angry Birds", one of those movies that is much anticipated but people are not sure if that's a good or bad thing.
We have a Finnish cousin (that's where Angry Birds are from) who told us about how important it was for Rovio (the company that makes Angry Birds) that this movie is successful since they are pretty much bankrupt so a lot went into it as a way to "save" the company and bring it afloat.
Right after I saw the movie, I read a review online that said that it "sucked" so I feel compelled to defend the movie somehow because it definitely DID NOT "suck".
I believe that the movie should be reviewed within the appropriate context and that is admitting that a lot of the puns, characters and jokes are exclusive to those who have at some point played the game of Angry Birds; so within the context of the game player, the movie is pretty good, funny and quite entertaining.
Not only is the story compelling but I also think it provides a great background about the animosity between the famous green pigs and the Angry Birds.  The viewer gets to understand why the Angry Birds are "angry" and who the pigs are, why they're after the birds and how it all unfolds between them.
I think the characters are very engaging and the writers do a great job bringing each of them to life according to their role in the famous game. The humor is light enough for kids and deep enough for adults; the animation is great, the plot is entertaining and the story has a happy ending, which is always great when you're dealing with a family movie.
With all the said, I do think the pace of the movie was a bit slow in the beginning but once the story took off, things turned out ok as it unraveled and despite a slow start the length of it was just right.
I will give this movie 2.5 out of 4 stars only because it could have been a little more "detached" from the actual game so that the non-players could feel more engaged and the general audience could be maximized, but we really enjoyed it.
Go watch it and help Rovio stay afloat! ;)