**Disclaimer: This post isn't directed towards anyone in particular, just a bunch of thoughts that I wanted to get out and right now seems to be the right time to do so**

Today's post is about "Strong Opinions" and the consequences associated with having them.
When I think of opinions, a classic scene from the movie "Inside Out" comes to mind; in this scene Joy knocks down two boxes containing facts and opinions and while she desperately tries to clean up the mess, she exclaims "Oh no! These facts and opinions look so similar" and Bing Bong replies: "Ah, don't worry. Happens all the time!" I love that scene for so many reasons and every time I talk about opinions I bring it up because it illustrates my point so well.
Often times I've been called "opinionated" by many people; some have told me nicely and some not so nicely..but I guess calling me opinionated is also an opinion, right?...oh, the irony! The truth is that YES, I have a lot of opinions, but who doesn't? I frequently voice some of those opinions in this blog, which is my personal platform and my safe space.  I am aware that some of my opinions ruffle some feathers and I am also aware that the problem with strong opinions is that they elicit strong reactions and once something is said, it's pretty much out there forever.
The official definition of the word opinions goes as follows: "a view or judgement formed about something, not necessarily based on fact or knowledge" so clearly opinions are NOT facts but rather someone's personal beliefs about any given subject.
I have recently gotten notes from people saying my opinions are "too strong" or that I'm "harsh"; I also know for a fact that some people visit my blog to purposely get annoyed at what I write, a fact that I find incredibly baffling and a bit masochistic but it happens and I can't prevent anyone from reading this blog since it's public.  The point is that I am aware that some of the things I say don't sit well with some people but I am of the believe that "if you don't stand for something, you'll fall for anything" so I write, and I opine and I own up to what I say and while stating my opinions is never intended to hurt or offend anyone that's something I can't possible change because I don't have control over people's reactions.
While many people claim to be "tolerant" and "understanding" the truth is that people can't stand it when others disagree with them and they tend to gravitate towards like-minded people because it's just easier to hang out with people that agree with them. Of course there are exceptions where people enjoy a good, healthy debate and don't mind taking the time to back up their opinions with facts... or at least try.  I personally don't mind being challenged and have actually learned a lot from people with opinions different than mine...debating is good..arguing isn't.
Coincidentally, on my last post I wrote an opinion about a comment a friend made regarding hurricane evacuations; this person reached out to me and we both agreed that our differences in opinions are not stronger than our friendship so we said our peace, apologized and moved on, no harm done! I am thankful for friends like him who take the time to approach me individually and delve deeper into my arguments... it's actually refreshing!
So my advice to anyone who gets annoyed by what I write is very simple "Don't read it!" but if you must then please don't confuse my opinions with facts; they might be facts to ME but I'm ok with them not being so for others.  To me, writing is therapeutic and I don't plan on stopping any time soon so if you've ever been offended by any of my posts... oh well...it is what it is!
People don't have to agree on everything to be able to love each other... heck, I rarely agree with my own mother and we love each other to death!
So keep on opining and keep on rocking!
Happy Blogging! 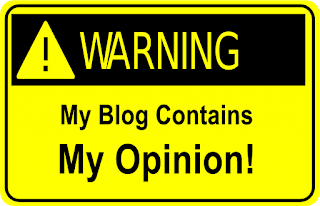 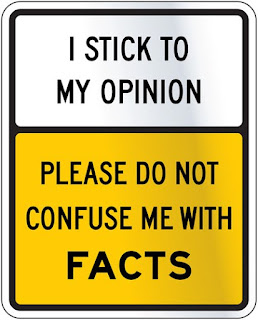