Our little bundle of joy is 5 months today! He's so cute and squishy and I love him to death, but I'd be lying if I said he comes without challenges.
Oliver has proven to be, by far, the most difficult baby out of our three and I've been struggling to come to grips with the fact that some babies just aren't "perfect" and moms just have to deal! "Why do I say this?", you may ask, and it's simply because Oliver is an AWFUL sleeper and such a high maintenance baby; he demands constant attention and entertainment and never sleeps longer than 2-3 hour stretches.  He wakes up 4x per night on average and I'm simply exhausted beyond belief; on top of that he hates naps for some reason so he could literally go on without a nap for 10+ hours, which makes for a very cranky baby who doesn't settle at night.
A friend of mine recently shared this article with me and I'm so glad she did because it came at a perfect time; a time when I was starting to think I was an awful mother for having crazy thoughts and getting so angry at Oliver for not sleeping at night! Another friend said to me: "sleep deprivation does crazy things to your psyche" and I couldn't agree more... some nights I start to think I'm going crazy from this ongoing survival/zombie mode I'm living in and then I remember that this is just a stage that some day will become a distant memory (hopefully sooner than later!)
I will say, however, that for every cry and fuss, he gives out ten smiles and kisses and it's right there when I remember how blessed I am despite the sleepless nights and constant exhaustion.
On another note, Oliver has mastered rolling and is almost sitting up unassisted. He is such a happy baby for the most part and LOVES attention and cuddles. He loves to play with plastic, flexible toys and puts everything in his mouth. He loves being in his baby carrier and loves laughing with his dad and sisters.
He is still exclusively breastfed and we haven't introduced any foods yet; I'm thinking I'll hold off until he's at least 6 months or shows some interest. I have noticed he has grown increasingly curious about food and loves to admire people while they chew but I'm holding off a bit longer because I know once he starts eating solids time will just fly even faster!
He weighs 18lbs 6oz and is 27 inches long; currently wearing clothes size 6-9 months and growing like a weed.

Here are a couple of pictures of my 5 month old! I can't believe he's growing so fast!
We love you Oliver and I pray that you continue to be such a happy and healthy baby.. I also pray that you get the hang of sleeping at night so mommy can get some rest.
Happy 5 months! :) 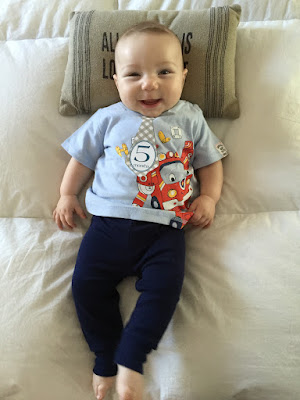 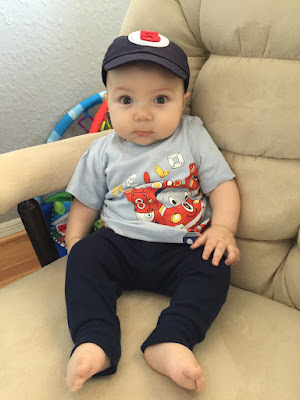