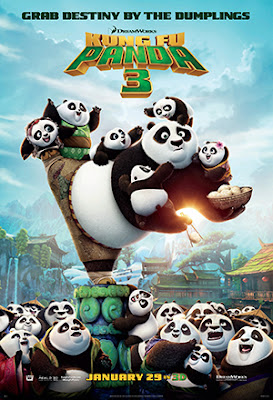 It has been a while since I've written a movie review and not for lack of movie attendance but rather lack of time to blog about it. But what better than a well known franchise to come back to my review writing days?
This past Friday we watched "Kung Fu Panda 3", and even though I've never considered this franchise to be GREAT...I think this 3rd installment was!
The movie has a much "lighter" and "upbeat" storyline compared to the previous two; it is also loaded with wonderful messages about life and learning.. my favorite being "If you don't do more than you know, you won't be more than you are!"; it is such a "feel good" movie and the kids really enjoyed it... Oliver included! ;)
The story revolves around Po and his ever important role as the "Dragon Warrior"; he is given a huge responsibility when he is asked to teach his fellow kung fu fighting friends.  In the process, he is reunited with his real father who takes him up to visit a beautiful panda village.
Po's challenges get even more difficult when evil Kai returns from the spirit realm and wants to steal all the pandas' chi (energy force) to be the most powerful being in the mortal realm.  Po is faced with having to create his own panda army to help him defeat the evil Kai.  He finds himself creating the strongest and most powerful army out of the most unlikely characters and that's where the message of the movie gets really good... "it's not about teaching people to be someone they're not...it's about teaching them to be their best selves"  I really like how to movie capitalizes on the value of each person and on the skill that each person has; every individual skill can make all the difference... "be the best version of YOU that you can possibly be".
As predicted, Po (and his friends and family) end up being the ultimate winners and come out triumphant and happy.
I really like that the movie is colorful, upbeat, features great music, amazing animation and the same warm and joyful humor that every character owns.  I really enjoyed this one and give it 4 out of 4 stars.  Great for all families!