Our little baby boy is turning 9 months today, which means we are officially entering the last quarter of his first year! wow!
Oliver is SUCH a fun baby and I absolutely love the age he's in right now; he's interactive, talkative, adventurous and very loving!
This month he mastered crawling (the right way!), feeding himself, pulling up to standing and he's VERY close to cruising around furniture; he can also drink from a sippy cup and is slowly getting the concept of drinking with a straw... go baby Oliver!
He is big and chubby and currently wears size 12-18 months; his legs are rolly and his cheeks are round and chunky.. have I mentioned how much I LOVE chubby babies!??! ;) Even though I don't know his exact height and weight, I know he's over 22lbs now; his next doctor's appointment isn't until mid-July.
As far as sleeping goes.. well.. I wish I had better news :(.. Oliver STILL doesn't sleep through the night and wakes up every 2-3 hours. His nap schedule is also very crappy and we've officially named him the "cat napper" since he NEVER naps for longer than 20 minutes; I still wonder where he gets his energy from since it sure isn't from sleeping! :/
Oliver loves music and as soon as he hears any song, he starts shaking and puts his arms up. He also loves tickles and finds waving good-bye to be one of the funniest things people can do; it's so cute to see him laugh when people wave at him.  He loves playing with balls, stuffed animals, cell phones and remote controls.
He eats SO MUCH and still breastfeeds like a champ...I swear he's addicted to my boobs and I'm already starting to wonder how I'm going to wean him off when the time comes even though there are no plans to wean YET!
Here are some pictures from his 9 months! 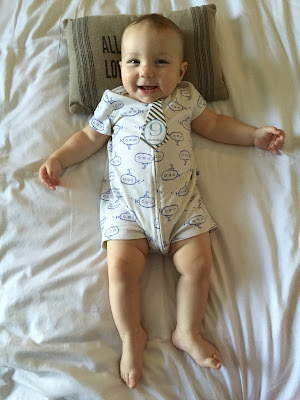 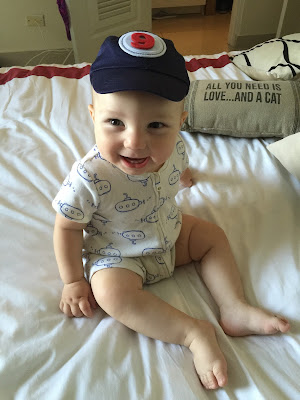 Oliver's first time in the pool! (06/16/16).. It was so much fun and I still can't believe I held off that long to put him in the water, especially living in South Florida.. he had a blast and couldn't stop splashing around! 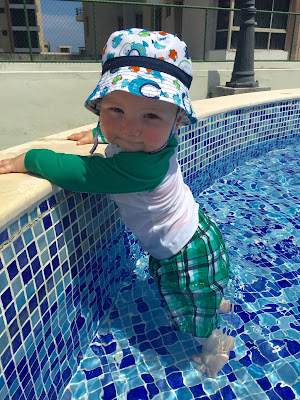 ..and here he is during one of his rare naps.. he looks so peaceful and I wish he did this more often! 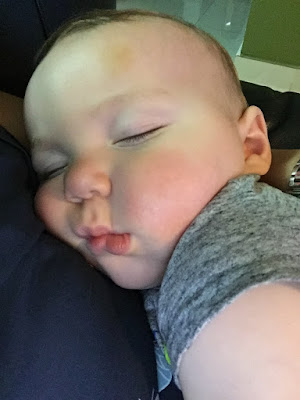 Happy 9 months Mr. Oliver! We love you and we are enjoying you so much!