Today Oliver turns 10 months, which means we're so much closer to his 1st birthday and also nearing the end of the baby years in our family.. it is a sad and happy feeling at the same time so we're enjoying him as much as possible...
Oliver is SUCH a sweet baby.. I can't handle how cute he is sometimes and how affectionate he can be even at his young age.
This month was HUGE for Oliver, especially in the sleep department (I can't believe I'm actually saying this!).. he FINALLY sleeps through (ish) the night! It was a long road but we finally made the decision to "sleep train". We were traveling for a month and the sleep situation kept getting worse and worse; he'd wake up every 45 minutes at night (sometimes waking up even 12 times per night!).. We were so exhausted and it came down to us even crying of desperation because we didn't know what to do..he just wouldn't settle.
So on the night we came back from our month long trip, we decided to just let him cry to sleep, following some version of the CIO (Cry It Out) method. As controversial at it is, I will gladly admit the method worked for us and my only regret is that I didn't do it sooner. He cried on and off for about 20 minutes the first night, less than 5 on the second night and not even a whimper on the following nights. It has now been 2+ weeks and he has been sleeping up to 7 hours at a time and going to bed without any issues.. I feel like a new woman and I'm glad we took the plunge! I hope he keeps sleeping the way he has and even longer stretches!
This month Oliver also visited the beach for the first time; he really enjoyed the sand and the warm water and it was so cute to see him crawl around without fears!
Oliver can now pull up to standing more firmly, he cruises around furniture, climbs stairs and is as mobile as he can be even though he's nowhere near walking, which I'm TOTALLY ok with! Ha ha!
He also babbles and talks up a storm even saying a good amount of words very clearly.  He follows simple commands, mimics sounds and movements, interactively plays with his sisters (or whoever!) and eats like a MANIAC! (with his two tiny teeth). We're still breastfeeding full time even though he eats all kinds of food in crazy amounts...this boy really loves food! :) He also mastered the skill of drinking with a straw and loves drinking water and juice boxes...
He enjoys music and starts shaking as soon as a song comes up; he laughs so much and his latest "thing" is grabbing his head when we say "oh no!"..it's so cute!
He currently weighs 23 lbs and is 30 inches long; wears size 12-18 clothes and is into noisy and rattly toys.. such a big boy!
Here are a few pictures of the newly 10 month old boy! ;) 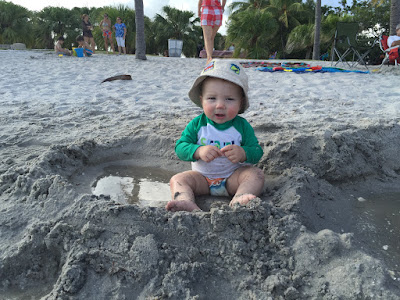 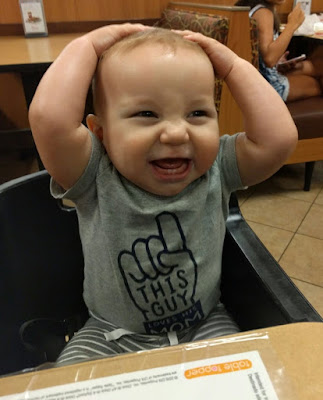 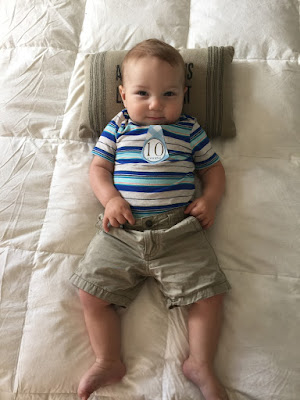 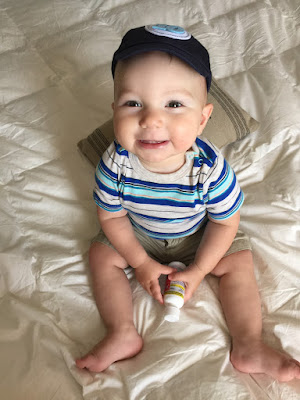