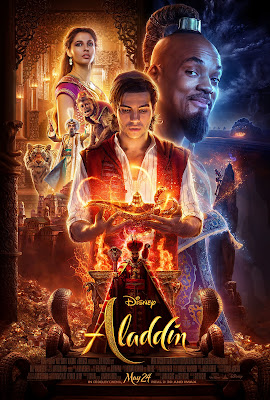 Even though many people whine about Disney re-making movies in live action format, I have to admit I am a sucker for those.. and pretty much anything Disney...
Aside from my obvious love for all things Disney, I find a lot of magic in the fact that movies from my childhood are still relevant today and the idea of sharing them with my own children makes it even better!
The remake of Aladdin has been long awaited by many and I was certainly one of those "many" so watching it on its first night was a no brainer!

I will start by saying that my expectations were very high...and even though the casting had been criticized by many during the movie's promotional months, I was determined to make my own judgement... and I'm glad I did!
This remake is VERY faithful to the cartoon version and the way the characters are brought to life by these actors was simply amazing.  Aladdin was just like I imagined he should be and princess Jasmine was beyond beautiful; Will Smith did an incredibly job as Genie as did the rest of the cast, including Jafar who was often criticized by movie critics for not being "scary enough".
The music and special effects were on point too and I was blown away by how perfectly executed the movie was... from the setting, to the music, to the incredible costume design and overall colorfulness of the film.. it was impeccable.
The movie included all original songs and also featured some new songs that are super catchy; the set up of the story was a bit different but not enough to deviate from the original.  I also like that they gave it a modern twist and even the parts that are most "fantasy like" (the actual appearance of Genie, the magic carpet, Jafar's hypnotizing staff, etc) were very realistic in nature. I also thought the pace of the movie was perfect and there was enough action and climax to keep everyone's attention.
I was particularly drawn by the artistic value of the movie and the way in which colors and music were incorporated and tied together, along with other elements such as dance, drama and animation.
I give this film 4 out of 4 stars and wholeheartedly recommend it.  It is a family film that is worth a visit to the movie theater.  We'll definitely be watching it again!
Posted by Stories of a Happy Mom at 11:51 PM