A tough school year leaves a bunch of insightful lessons... 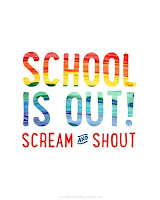 School got out a little over a week ago and I'm just getting a few minutes to write a wrap-up entry about one of the toughest years we've had since the kids became school aged children.
With every painful experience usually comes a great lesson and this year was not the exception; the kids and I all went through unpleasant experiences at different times during the school year but thankfully we all came out stronger on the other side and also (hopefully!) wiser too!
Because I don't want this entry to be too convoluted, I will go ahead and organize it child by child...here's my attempt at summarizing the 2018-2019 school year.

OLIVER
At almost 3 years old Oliver was coming from a very small pre-school and into a bigger school where his sisters already attended. We hesitated a lot about the change because he was still so little at the start of the school year but we did it out of convenience because going around town picking up kids from different schools can be very challenging, especially when the schools follow different calendars and days off rarely coincide. He had a rough couple of weeks but I'd say I had a harder time than he did.
At first I thought his teacher was super dry and for some reason I got a stand offish vibe from her, I wasn't too sure she could be the loving teacher Oliver needed at the time and don't even get me started on the moms from that class (**insert major eye roll**)...we had a welcome breakfast and I was honestly bracing myself for the worst year as far as friendships went because no one was instantly nice to me.. oh well.. only time would tell...
As the months went by, Oliver's teacher turned out to be the nicest person and such an amazing educator, someone we grew to love and is such a blessing in our lives. We got the great news that she will be his teacher again next year and I can only thank God for such wonderful turn of events...
As for the moms... let's just say I can picture myself forging life long friendships with these sweet ladies and I'm glad I was SO wrong about them and the dynamic that would evolve among us...
By the end of the year Oliver LOVED his new school and made wonderful friends.  I had a great year with the my new mom friends and became very close with his teacher, who will grace us again with her love for our children for another whole year! (yay!)
Moral of the story:  Never judge a book by its cover...and my preschooler turned out to be way more resilient than I ever expected him to be! You made us very proud, Oliver!

GABY
Poor Gaby was probably the one who struggled the most during the school year, from ongoing bullying from several classmates to struggling in math, let's just say I wish she could have a 4th grade do-over.
By the 3rd month of school, I was seriously concerned about Gaby's emotional well being and on several occasions I even considered getting her into therapy of some sort.  Because of the bullies and the rejection she experienced, Gaby became very withdrawn and the only activities she enjoyed were building Legos or reading while locked up in her room; she had several panic attacks between November and February and despite my repeated attempts at mitigating some very bad situations and mediating with the school, at some point I feared that my sweet Gaby would never be the same.
I had run ins with several moms from the fourth grade when I stood up for Gaby after realizing some of the bullies' behavior came straight from their parents (sad but true!). The school did very little to make things easier and in the end it was time what healed all wounds...and continues to heal them...
Gaby's teachers were incredibly graceful and helpful and despite their limited ability to make a dent in some situations, I am grateful for their efforts, their compassion and their love for my sweet daughter.
Throughout the school year and despite all the negativity, I decided to focus on the positive and to encourage Gaby to nurture her good qualities and focus on building herself up through personal achievements and goals.  She became a stellar reader and read over 70 books, repeatedly setting and crushing her own reading goals. She slowly came out of her shell and conquered her fears and I was so proud to see her fall and get back up more than once.  She ended the year with few but very solid friendships, excelled in school and became her own person.. Go Gaby!
Moral of the story: When people show their true colors.. believe them! Don't let anyone ever make you doubt yourself and trust that God always has your back!

OLIVIA
Two words: Periods and Boys! Judging by this school year I can probably anticipate that the teenage years will be the death of me. I have posted about this before, how I think dealing with a tween (soon to be teenager) will make me lose some hair and lots of sleep.
The sixth grade was likely a small prelude of what's to come in Olivia's (and mine) life and let's just say, to my dismay, it wasn't all peachy.
Although for the most part Olivia is sweet and obedient, sometimes hormones get the best of her and her getting her period early in the school year didn't help the case; there was more eye rolling than I would have expected and slamming the door became a frequent reaction at home.  She did pretty well with grades during the year but somehow managed to get her first B ever in the last quarter, which I blame on too much time on her phone and little time on studying; the fact that some her teachers were less than nice didn't help much either!
And just when I thought I was getting the hang of the "tween thing", a boy gets involved and things just went downhill from there. This said boy managed to nearly destroy Olivia's best friendship since kindergarten, messed with her self confidence and  on occasion turned her into a rude and mean girl; one I didn't know at times and one I hope I never have to know... I believe it's entirely too early for this but what do I know... this is uncharted territory for me!
I certainly hope Olivia can learn from her mistakes and learn the importance of friendship, kindness and "girl code".  There will be a lot of thinking and healing done over the summer!
Moral of the story: Growing up is probably harder on moms than it is on kids...and hormones SUCK! I also learned that ongoing communication is key in a mother-daughter relationship and that I can never ask too many questions to my daughter about her life and her friends... 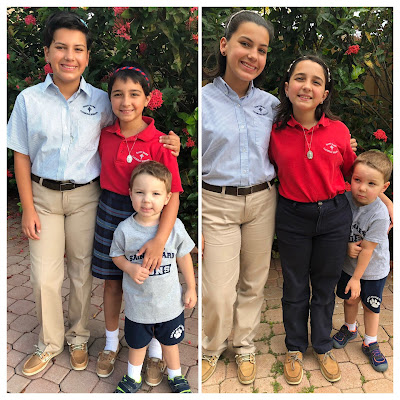 Despite all the challenges I know we all learned a lot this year. Sometimes growth can be painful but from that pain also come good things and insightful lessons and we all got that too.
I would be lying if I said I didn't cry a lot this year; some days were hard and some were harder and that made for a tough school year but all in all, I am thankful for the kids' school and all the support I received both from friends and strangers. When things got tough, there was always someone I could count on, whether it was a shoulder to cry on, someone to laugh with or a place to find encouraging words...
I am thankful for new and old friends, for the lessons learned, for the tears cried and the shared laughter.  This was a year to remember!