Welp!... that was a terrible decision! 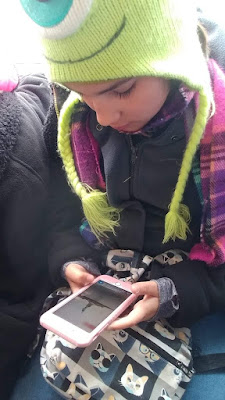 Even though I never thought we would be invulnerable to the cell phone addiction, I did think I'd be able to have some control over what my daughter did with the phone, over what kind of content she'd access or even the kind of apps she'd be on.
I made the choice of giving Olivia a phone when she was 10 years old; I happened to be switching to a newer device and she begged me to keep my old one so I agreed.  I had swore I'd never give my kids a phone that young but after many stipulated contingencies and warnings, things didn't seem too bad... after all we do live in a world where technology rules everything and many kids her age already had phones so why not! I did not see any immediate harm to her being exposed to having her own phone especially since I'm a big proponent of technology.
The first few months were all fun and games..literally! All she did was play kid games, take cute photos of her and her siblings and text me random "I love you" messages; she'd occasionally call some of her friends or maybe text some family members but it never went beyond that..things went pretty well for a few months so I was satisfied with my decision..
A few months went by and she asked if she could get an Instagram account; at first I didn't agree considering it's an app targeted to 13 and older but considering I'd be closely monitoring her content and since she had been handling her phone pretty well, I agreed to that too with the condition that she opened a private account that would also be on my phone and I was the sole administrator (meaning only I could approve followers). She added our closest family members and even some of my friends and rarely ever posted any pictures.  I specified from the start that no duck-lip selfies were allowed and that all photos and captions were to be approved by me before she even posted them...she complied without much resistance.
About a year into it, I noticed she was staying up way too late playing with her phone and the texting had gotten more and more frequent; she also didn't follow some of the rules I set out for IG use such as the approval of followers.  At that point more of her friends had phones and there were group chats, SnapChat communities, musical apps and a few other things I didn't agree with...I realized then that I might have been a bit too naive in trusting that my 11 year old child would make smart choices regarding a phone.  In an attempt to regain control over her cell phone use and content, I resorted to parental controls; not only did I set strict limits on screen time but I also uninstalled a lot of apps that shouldn't have been on her phone to begin with.  I set up minor iCloud accounts and now all downloads would have to go through me first; I also set her text messages to be delivered to my phone too so I could be in the loop and follow her conversations (this didn't last very long!).

As time went on, I kept noticing that the phone became the center of everything, also the reason for pretty much every problem...her mood swings, her late wake ups, her not so good grades, her failure to finish daily homework, her issues with friends... all of a sudden Olivia became all too concerned about likes and followers and whatever comments people made on her posts.. social media became the death of me (and her!) and she's definitely too young for that...too young to seek validation through a phone, too young to be withdrawn and distracted from our daily life, too young for disrespect, too young for rudeness...
I slowly became a phone police and my whole life revolved around the constant monitoring of Olivia's phone; who texted her, what kind of pictures she took, what kind of comments she was making/getting, etc... it was all too intense!
Aside from everything I've mentioned, I started noticing the content she was being exposed to was way beyond her years; in her Instagram account she followed a slew of celebrities and so called "influencers" who brought nothing positive to the table.  The vulgar content somehow became inevitable and the negative impact of most of what was coming from her phone use inescapable. We reached a point where no parental control was ever enough because most apps are designed to encourage kids to hide stuff or do things that aren't age appropriate and most celebrities, YouTubers, influencers seem to be dedicated to stealing the innocence of their younger audience and I am NOT ok with that...
Two years later I realize I made a terrible decision by giving Olivia a phone at 10 and I wish I could turn back time and think it through a little more.  Kids DO NOT NEED phones, they don't need to be exposed to so much garbage day in and day out, they don't need the distraction and they definitely don't need a tool that encourages dishonesty and a silly need for validation.
Some people would argue that it's a trust issue or maybe a maturity issue and while I do think that plays a role, I think it has more to do with letting the kids be kids for a while longer.
At this point I have uninstalled all most apps from Olivia's phone and I have set stricter screen time limits; she isn't allowed on Instagram, SnapChat, Tik Tok or any other app that would encourage dishonesty or living beyond her years.
With all that said, I want to point out that while Olivia didn't do anything terribly wrong or shameful with her phone, I realize she isn't mature enough to handle whatever having a phone entails.  I am glad that even though I made a poor decision, I stuck to my guns and continued to monitor her phone use and possibly avoided potentially compromising situations and will continue to do so.
So.. if you're thinking of giving your child a phone, please take into accounts all necessary considerations and never let your guard down!
Posted by Stories of a Happy Mom at 5:54 PM