Happy New Year! (LOL!). January came and went and the busyness of life got in the way so my first 2022 post is just happening! Better late than never, I guess! I hate when I can't find time to sit down and decompress my mind through written words although I am sure this isn't exclusively an "Adriana" problem. 🙈.  And here I am...rambling once more!

Last year was busy! Most people were still reeling from 2020 and trying to figure out their "new normal"; I guess we were all collectively trying to come out of the funk that COVID brought on. I know it was definitely harder for some people but we tried to make the best of it.

In December, we went on our first international trip since the pandemic started. This time we chose to go to Spain for several reasons; first of all I was turning 40 (yay!), my mother in law happens to live in Madrid and Spain was one of the European countries with the less restrictive COVID measures.

I will recap some aspects of our trip for anyone interested in either knowing how it went or maybe even traveling to Spain in the near future.

We flew out of Miami (MIA) via Portugal and had a 2 hour layover in Lisbon.  While Spain does not require a negative COVID test to enter, Portugal does even if you're just in transit. Both PCR and Antigen tests are accepted so we opted for a PCR, taken 3 days before our scheduled trip.  Most countries are also requiring some sort of QR code that is done in an app and then shown to be scanned upon arrival. The checking of the COVID test was a joke, I could have shown a drawing by Oliver and it would have been the same as the negative test; the agent merely glanced at it (both in Miami and Lisbon).

Upon arriving at Spain, we showed our QR code previously generated; it was scanned and our entrance was approved.

I will be honest and say that I was expecting the airport experience to be a traumatizing thing, but it was incredibly smooth and just another thing to do.

I can't say the same about baggage claim, though! LOL 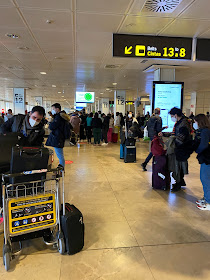 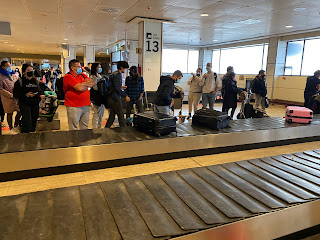 The flight(s)
For this trip we flew on TAP (a Portuguese airline); not only was it the cheaper option but also because it was the shortest out of the cheaper options! LOL. We had a layover in Lisbon both on our way to Spain and on our way back home. I'll be totally blunt; the mask enforcement on the plane was a joke! On such a long flight, I guess the flight attendants just don't have the patience (or the energy) to be policing every passenger.  Half the passengers were asleep with a blanket over their face, a quarter of them were "actively" eating or drinking and the remaining quarter had a mask that was covering their mouth but not their nose. So yes, I think mandating masks on planes is ridiculous and it only adds stress to an already stressful situation.  And nobody cares... not even the ones who pretend they do.
The kids were angels on the flight; none of them slept and all they did was watch movies. The layover was a pain because our connecting flight was late so the exhaustion was unreal. Thank God for priority lounges, though...such life savers!
The jetlag
Jetlag is always a b**ch but this time it hit us extra hard. I don't know if it was the extra steps and precautions we needed to take for traveling in COVID times, the emotionally draining aspect of an overseas trip during Christmas, the flight delay, the change in weather or all of the above, but by the time we got to Madrid, we were beyond EXHAUSTED!!!  Poor Oliver quickly regretted not sleeping during the flight and we literally had to drag him around the airport because he was passed out! 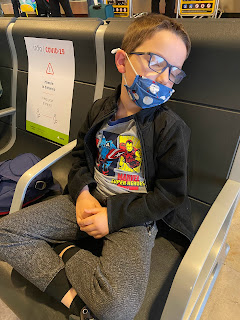 The reunion
Aside from it being my 40th birthday trip (I officially turned 40 while on the flight Spain), traveling to Spain also meant reuniting with my in-laws for the first time since COVID hit. Iggy really missed his mom and the kids definitely missed their grandparents. They came to get us at the airport and we were all a collective mush with all the crying (happy tears, of course!). It was so nice to be able to squeeze each other hard and share the love. Spending time with my in-laws made for an interesting trip; they hosted us and took us around and it felt so good. Of course there was bickering and the occasional disagreement, but it was overall an amazing thing to be together and share Christmas with them. I was particularly moved by seeing the connection between Iggy, his mom and the kids; so refreshing! 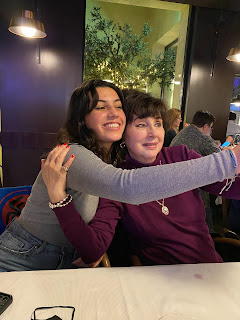 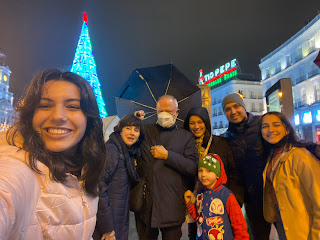 My birthday celebration
Turning a year older while on a flight was definitely a first for me. I had been looking forward to this trip for months and I was naturally excited; but there was something about turning 40 away from my parents and sister that made me a bit sad. We've always celebrated milestone birthdays together so I will admit to feeling a little weird. Add the indescribable exhaustion to that and the combination can be lethal.  My actual birthday is a blur, I was literally a zombie all day and even after the 4 hour nap I was able to take upon checking into the apartment, I probably only remember about half of what I did or said on the night of my birthday.  My in-laws were excited to invite me to dinner so we went, but in hindsight, it would have probably been a better idea to call it a night and celebrate the next day. I am forever grateful to Iggy and all of my family and friends for making my day so special.  My dear sister organized a surprise birthday party before we left so my birthday definitely didn't go unnoticed. Special year for sure! 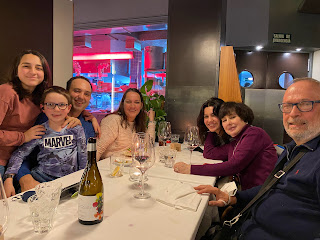 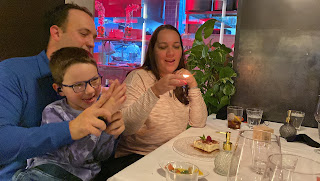 The day after my birthday was the official "recovery" day. I can't remember ever being as exhausted as I was by the time I finally went to sleep. I can honestly say that December 23rd, 2021 was a complete "sleep" day. I woke up around 6pm local time, had dinner and went back to sleep... no regrets!
I will post more about Christmas and our wonderful time in Spain on my next installment.
Happy Blogging!