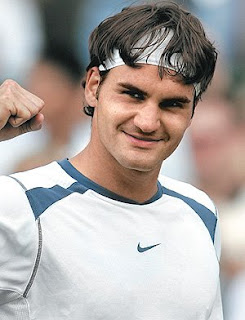 Some of you may know that Iggy and I are big tennis fans! Iggy has been playing tennis since he was 9 years old and even played for college... he's actually really good at it and tennis is his favorite hobby. Ever since I met him I became a fan myself and I love to watch him play, especially since I know how much he enjoys the sport...
Currently the French Open (Roland Garros) is being played in Paris, France and I've been following it every day... it's so exciting!!!
Spanish player Rafael Nadal, who has won 4 straight French Open titles was recently defeated by a Swedish player, I was actually happy to see him lose since I want Roger Federer (my favorite player) to finally win this title; he will make history if he does win.. since he has has won all but the French Open title and I'm rooting for him this time.. this gets more exciting by the minute!!!
Go Roger!!!! You're the best! ;)
Posted by Stories of a Happy Mom at 1:31 PM