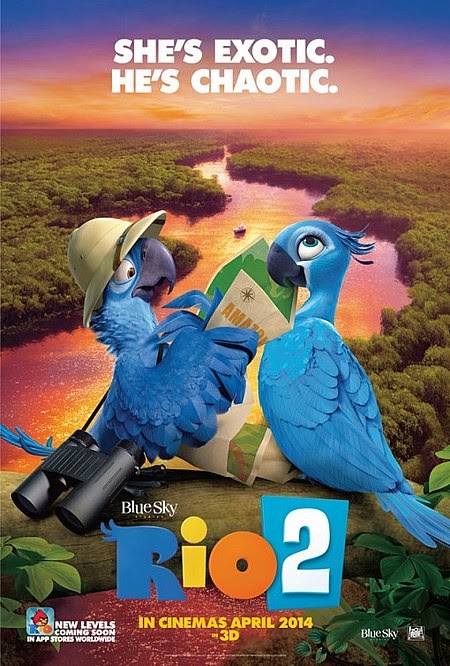 By now you all probably know that I am entirely mildly obsessed with animated movies; I watch them, I enjoy them, I dissect them, I review them... I basically LOVE them!
When the movie "Rio" came out back in 2011, I knew they HAD to make a sequel; the characters were fascinating and everything about the movie was perfect (the review for the original "Rio" can be found here); I thought there was so much material to explore within this compelling story...
Fast forward 3 years, and here's "Rio 2" (yay!).  As much as I agree that sequels are never as good as the originals, I have to say that this one was pretty close.
We are back with Blu and Jewel and their lovely Blue Macaw family; in the first part of the movie their day to day life is described and we get a glimpse of all the familiar characters!
The story unfolds as Linda and Tiago (the human characters) discover the possibility that there might be a whole other flock of Blue Macaws in the Amazonia and they decide to save their ecosystem.  Blu and company decide to fly out to help them out and once they reach their destination, they run into some crazy adventures and hilarious characters!
The sequel follows up with the witty humor of the first part and the characters do not disappoint! There's music, colors, great scenery and of course a wonderful lesson at the end!
I really loved how the writers delved deeper into each character and produced yet another fantastic movie; entertaining for the whole family.
I will say, however, that the movie was a bit slow around the middle part and the kids seemed to drift off for a bit, but in the end it was an overall success!
This one gets 3.5 out of 4 stars and definitely deserves a trip to the theater! :)
Posted by Stories of a Happy Mom at 6:50 PM