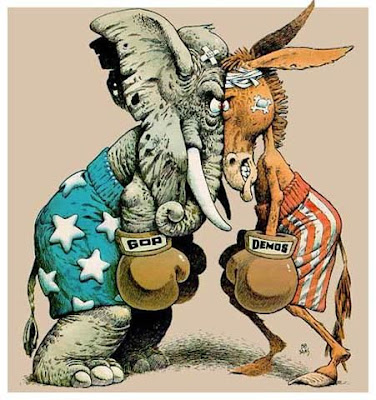 It seems like yesterday when I wrote this post about my position regarding politics on Facebook. At the time I wrote it I felt like things got really "hot" and many of my cyber friends verged on offensive and "out of line"...
Four years later, even though my opinion on this subject hasn't changed much, I feel like social media is simply out of control when it comes to politics...way more than it was back in 2012.
We all know this election is "special", it is by far the most controversial and divisive one I have witnessed in my lifetime and we also know that most people have pretty strong opinions about one candidate or the other...that's life, that's politics and that's never going to change!
With that in mind, there are still some things I'd like to point out based on my observations during the months leading up to the upcoming election, and this applies to EVERYONE, no matter who they're voting for, no matter where they stand....
1. Not everyone will agree with you
You might have an awesome friendship with someone, you might find a lot of affinity with certain people but that doesn't mean that person will always agree with you; this is particularly true in the case of politics so keep that in mind when you're engaging in a political argument with a friend or family member.
2. There is dirt and sh*t on both candidates and people WILL talk about it!
"The lesser of two evils" is a phrase that has taken a life of its own in this election. It's almost entertaining to see what the next scandalous finding will be, what the next leak will tear down one of the candidates and especially what people will write about the "crappy" candidates we are face with. Almost as entertaining is the fact that the polarization is such that as much as some people think one candidate is "far worse" than the other, there will always be someone that thinks the exact opposite and that, my friends, won't change much either, so don't waste your time trying to convince anyone that one is worse than the other, or viceversa...guess what? Nobody's perfect...especially politicians!
3. Being rude and offensive won't get you very far
As much as I bite my tongue and try not to comment on any political post, some people are so rude and offensive that I can't ignore them.  If/when you're going to engage in a political fight with someone online, think before replying...is the fight really worth it? will you get your point across? will your comment add any true value to the argument? are you willing to lose a friend over politics? When someone starts name calling, they already lost the argument and it's not worth stooping down to their level!
4. You won't convince anyone to change their mind by posting a link on the internet
This one is somewhat related to my first point. I find it funny when people engage in political arguments and base their opinions on obscure links intended to help them prove their point. It turns out that there is "research" and "evidence" that can help you prove ANY point and most of these article links are biased (to support whichever side!) and not very objective. If you want to convince someone to change their mind, debate with you OWN ideas! Trust me, you'll have a better shot at it!
5. Nobody will hate you for supporting a candidate, but they will sure resent you no matter what!
I have read so many posts that say "if you support such and such, do me a favor and unfriend me now!".. really? wow! Friendships cannot possibly be so weak as to not be able to withstand an election. If your friends love you or hate you based on who you're voting for, there needs to be some serious thinking done by you and them! Vote for whoever you want, who cares if people "hate" you for it?
6. Whoever wins will be EVERYONE's president. Whether we like it or not, there will be a winner come November 8th and that winner will be OUR president. So many people post things like "I can't believe I have to vote for one of these two clowns" or "These two can't be our only options"..but guess what? We do have to vote for one of them and they ARE our only options (I don't mean to dismiss other candidates on the ballot, but let's be real!..they have no chance!). So let's stop the divisiveness and accept the fact that politics are cyclical and ever-changing and our American values are stronger than anything...or at least, I like to think so!

With that said, I can't wait for November 8th and I can't wait for my news feeds to go back to babies, food and fashion...
Happy Election, everyone!
Posted by Stories of a Happy Mom at 11:14 AM