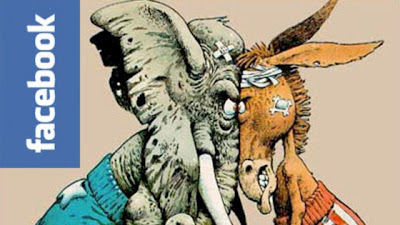 For years now Facebook has been a place where users post whatever is on their mind, share anecdotes, pictures and just entertain themselves with what others have to say... it's such a great outlet for everyone and it's only becoming more popular as time passes.. (thank you, Mark Zuckerberg!)...
Well, considering this is an electoral year, especially crucial for the fate of our nation, Facebook has also become the place where people just spit out politically charged opinions and put in their two cents about who they think should rule our country, or how things should be done, or what laws should change, etc.. While I don't necessarily disagree with people expressing themselves, I do dislike the fact that as election time nears, the comments get more and more aggressive and more and more personal.. I think in the spirit of expression themselves, people have lost respect for each other and the issue of politics on Facebook is going way too far...
These past few weeks, for example, have been particularly disturbing in the FB world with all the political crap going on.. it's really annoying!
I have friends that have been brutally attacked for posting their political opinion on FB and for opining about politically charged issues.. that can't be fun!
The truth is that everyone has different beliefs and perspectives, and none of the comments that are posted on FB are going to change anyone's mind about how they feel... I get some people enjoy sparking debates and having "civilized" political discussions with their "friends", but in reality most of these discussions get out of hand and people just end up "unfriending" each other because of a discussion that was most likely taken out of context (considering reading internet tone is quite the challenge) and which in the end does nothing good for either party... Pointless if you ask me!
I also have to say that many people (on FB and everywhere else) tend to ASSUME "where" someone stands about an issue based on their political party or particular perspective... Take my case, for example... I am a proud CONSERVATIVE and most of my decisions are based on such beliefs, however, that doesn't mean I hate gays and oppose to them getting married (I actually could care less), or that I would disown someone who has an abortion, or that I think Obama is evil... that just means that I lead MY LIFE (which is what I should care about) with conservative principles and that I raise MY KIDS with similar beliefs... what's so wrong with that? Do I want the best for our country? Yes.. but I know I'm not going to get there by offending people and plastering my political opinions on FB and offending anyone who disagrees with me... Why do that?
I'm honestly getting tired of FB politically charged comments, posts, pictures, etc... It's supposed to be entertaining (at least for me!), but instead it's such a headache sometimes...If this keeps going I will have to do some "unfriending" myself.. because it's really getting to me!

I found this in another blog and I thought it was brilliant.. maybe some of my friends will "get it".
Top 5 Reasons Why You Shouldn't post about politics on FB:
1. You could lose a friend
2. You could lose a client
3. It's a waste of time
4. It's the wrong platform
5. There's enough politics in the media


With that said, I still have hopes for FB users... I appreciate civilized political debates and all my friends who have the decency to respect what others have to say, but honestly discussing politics on FB is a real waste of time and it doesn't promote anything positive and it certainly won't change what people have on their minds!
Posted by Stories of a Happy Mom at 10:48 AM