If I had to pick the worst "task" required from a toddler mom, I'd definitely pick potty training. I basically DREAD this stage and hate it with a passion but I figured sooner or later I'd have to get this last baby out of diapers so why not do it NOW! The sooner the better, right!?  WRONG!
I often hear the phrase "potty training boys is much harder" or things like "you got so lucky with the girls" or more often than not, many discouraging statements claiming that 22 months is simply "too young" or that I'm being "too ambitious"..that does NOT help, people! I need some empowerment!
So, based on my past experiences, I decided to go with the "3-Day Potty Training" method, after all the author was the ONLY person encouraging enough for me to give it a go.
The method suggests to go "cold turkey", basically do away with diapers at once and focus on the child's cues for 3 days straight; it also suggests that on day 3, it will MAGICALLY click and the child will just start going on the potty without prompting.
The author does warn parents..."there will be LOTS of accidents", at some point she even suggests getting AT LEAST 30 pairs of undies because less than that simply won't be enough...
Boy is she right! This has been a horrendous saga for us!
It all started with Day 1 and five "accidents" within one hour; I don't think I've ever mopped my floors so much in my life (thank God we don't have carpets!)..Oliver used the potty ONCE that day and it was by some miraculous save that Iggy had. It was NOT successful.
Day 2 seemed to bring some progress I even took the diaper off for sleeping and he woke up dry but that was false hope because very shortly after that he pooped his underwear and the mess was less than desirable to clean.
Day 3 was a MAJOR regression... he started crying every time we put him on the potty and didn't use it even once. We spent all day cleaning up pee puddles and hosing off soiled underwear.. it was NOT pretty. He even stopped caring whether he or not he had poo or pee on him and all he was focused on were the rewards we were handing out. (Skittles and stickers quickly became the main purpose of him even walking in the bathroom.. LOL!)

Needless to say, the "3-day" method DID NOT work this time around for many reasons:
1. We were not able to stay home for 3 days, especially considering that it was the weekend and we had church and other affairs.
2. I was not focused enough and often took my eyes off him so that didn't work out.
3. Our days were incredibly hectic and we were all over the place, even when we were home.
4. We were "lazy".. I guess something about watching a half naked toddler all day was not very appealing to any of us... (oops!)
5. He might not be ready (although from everything I've read, signs of readiness can be as little as being able to communicate his needs...which he clearly does!)

Even though we haven't given up completely, I am not holding my breath.  We've been informally potty training for over a week now and it's a hit or miss, so we'll just stick to slow and steady for now.  While he has used the potty (just for pee!) on several occasions, I don't think he gets the concept and is definitely not interested in being out of diapers....at least not as much as we are!
We have resorted to pull-ups and training pants even though those go against the method we were using initially and I'm starting to question whether spending twice the money on those than I do on diapers is even worth it considering he doesn't see a difference. He has been wearing underwear at home but I still have to watch him like a hawk and spend half the time mopping puddles on a daily basis.
So the "Potty Training Saga" is far from over.. I am both bummed out and frustrated but I want to remain hopeful that my child will decide that wearing diapers is "for the birds" and being a "big boy" is just THAT much cooler! Ha! 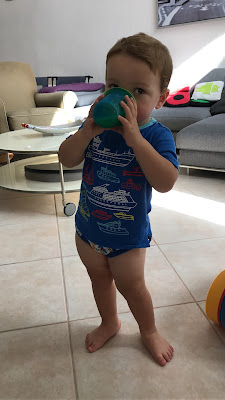 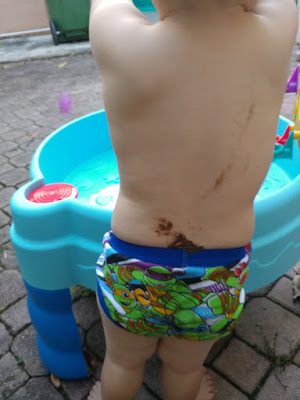 Oliver trying to score some Skittles for doing nothing! Clever boy! 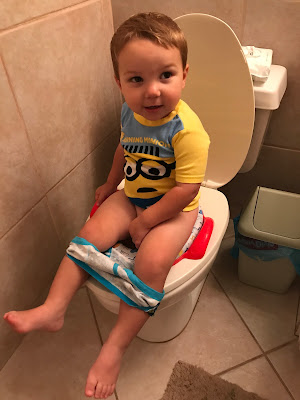 If you have any good advice for potty training boys, please send it my way. I was prepared for this to be a hassle, but I really want it to be over!
Thanks to everyone who has followed my Instagram and Snapchat stories and has provided words of encouragement... they mean the world to me!