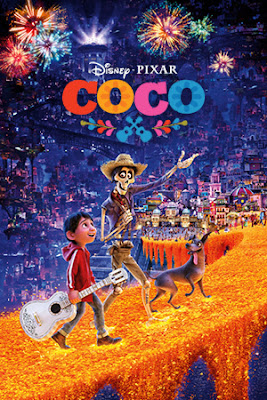 "Coco" is one of those long awaited Disney/Pixar films that gets released right on time for big audiences and with lots of hype.
Sometimes that hype works in the movie's favor, sometimes not so much.. I'm not sure which way it went for "Coco".
While it is a great movie, with a great story line and wonderful characters, it failed to capture my attention from the get-go.  The movie's pace for the first half was incredibly slow and it took way too long for the story to be laid out...it was painfully boring for at least the first 45 minutes. Once the movie took off, all was right in the world but I have to be objective and critique it as a whole and not as a half movie.
The story revolves around the Rivera family, particularly one of its members... Miguel, a kid who has a love for music in a family that has banned it from its existence due to past hurts.
Miguel wants to follow his dream of being a musician and ends up in the world of the "dead" after a failed attempt to steal a guitar on "Dia de los Muertos".  During his time with the dead, he finds out secrets about his family and meets past ancestors who happen to be key in his love for music and who teach him that family always comes first. The movie is big on the message of keeping the memory of the dead alive and how our ancestors play a big role in our present life.
"Coco" is a very colorful movie, the characters are wholesome and fun but I found the storyline to be a bit complex and a little tangled.  Also, I feel like the title is not exactly descriptive of the story and the first half of the movie is somewhat misleading, almost as if the writers weren't sure in which direction to take to movie.
I really enjoyed "Coco" and I know it's a movie that will make a lot of money and will become a classic, but I really wanted it to be perfect and it wasn't. This one gets 3 out of 4 stars from me. Nonetheless I encourage you to go see it and take your kids; it will make for a nice family outing!
Posted by Stories of a Happy Mom at 7:10 PM