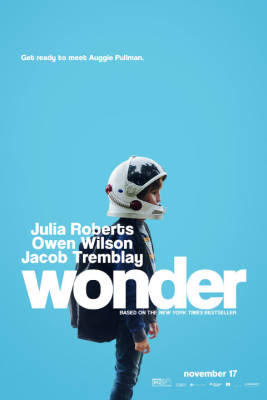 My daughters have been wanting to watch this movie since they saw the initial preview.  Olivia even took the time to read the book prior to the movie to get an anticipated idea of the characters and the story so it was only natural that we saw it on opening day.
The movie revolves around the story of Auggie, a boy that was born with a genetic issue that caused a facial deformity, and his struggle to fit in once his mother decides to stop home schooling him and sends him to a regular school.  It is packed with emotions and it paints a clear picture of just how mean kids can be and how unprepared the world is to accept disability as diversity.  The story is captivating and Jacob Tremblay does a great job portraying a sensitive and emotionally mature boy that has a thicker skin than many adults can aspire to.
The way the movie is structured gives way to the viewer to learn about the perspective of each of the main characters and how they all play a role in Auggie's success and ultimate acceptance from his newly found friends.
I really enjoyed the way the story develops,  the depth of each character and the message they try to illustrate. I love Auggie's sensitivity and his characterizations of all the emotions that a disabled person feels when struggling to feel accepted.
From the perspective of a mother, I also appreciate the portrayal of Auggie's parents and the description of their own struggles to make it "easier" on their son. Julia Roberts does a great job illustrating the suffering of a mother when their child is rejected or hurt; she made me shed a lot of tears.
But despite the powerful story, one of the main flaws I found in the movie was the lack of chemistry between Owen Wilson and Julia Roberts; while I believe they are both great actors (each in their own element), I did not feel their love and they did not convince me with their acting in this particular movie.  I think their chemistry was disgruntled and their relationship lacked that powerful love that I needed to see from Auggie's parents. It was very hard to picture Owen Wilson in a role that is less funny than his usual roles and I do not think he was the right person to play Auggie's father.
Also, I think the side story of Auggie's sister was a bit far fetched and I couldn't see a clear connection between her issues in relation to Auggie's disability. Now that I think about it, the chemistry between all family members was lacking, in my opinion... except for the dog, she was a great actress! ha!
All in all Wonder is a great movie, it sends of message of resilience, personal acceptance, character strength and love and it illustrates the triumph of inner beauty over shallowness, ultimately leading the viewer to connect with the main character and love him for who he is.
I give this one 3.5 out of 4 stars. Worth a visit to the theater.
Posted by Stories of a Happy Mom at 10:43 PM