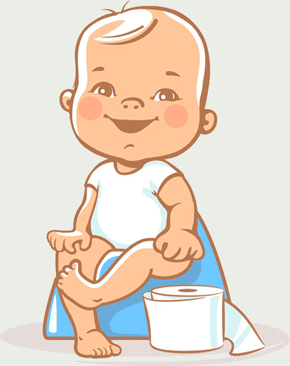 About a year ago I wrote this post about my failed attempt at potty training Oliver, who at the time was about to turn 2. I had read somewhere that 23 months was an "ideal" age to potty train so I set out to conquer this dreaded task. I, of course, failed and became incredibly frustrated considering I had successfully potty trained our 2 girls at 22 months and 30 months. Potty training was never a challenge for me and I mistakenly thought it would be just as easy with Oliver....WRONG!!
Many of my friends had warned me that potty training a boy was a bit different and "boy were they right!". I tried and tried incessantly for the next few months (not continuous months!) and it just wasn't happening... It was like Oliver was completely oblivious to the fact that he eventually would have to do away with diapers and be like every other person who pees and poops in a toilet.
At one point the whole ordeal was affecting my mood and making me question my motherly abilities.. I know I was taking it way too seriously but I was just done with changing (and buying) diapers... I knew I had to let it go...so I did!
Summer rolled around and the pressure was mounting again because I enrolled Oliver at the girls' school and he just HAD to be potty trained come school time (August), so I basically had 10 weeks to get this done. Around mid June I decided to "pull off the bandaid" and just do it! We took off the diapers and it just "clicked" for him; within a couple of days Oliver was peeing on the potty consistently and we got through the weekend with almost no accidents; granted we had to take him to the potty constantly and just remind him that he HAD to go.. and he did it every time...I was so happy!
So we basically spent the next few weeks helping Oliver master the art of the potty and between random pee (and mostly poop!) accidents, he was officially out of diapers and ready to take on the world!
I won't lie, it wasn't an instant thing and I feel like he struggled much more than the girls ever did.  There were worse days than others and even though he was (mostly) willing to go along with potty training, I spent a good part of my summer cleaning pee puddles and wiping poop off his butt.
Around mid July he was already sleeping in underwear and even asking to go potty on his own.  We bought a little urinal on Amazon and even though he rarely used it at first, it ended up being a hit and he even learned to pee standing!
The poop part was (and still is) a bit more challenging...he has random accidents throughout the week and it's still a work in progress but I am confident he will master it in no time.
Even though it has been 2 months since Oliver has been out of diapers, it took me this long to finally believe it and write this post.. I didn't want to jinx myself because it was an uphill task for us.
Some of the things I learned this go around are as follows:


I am happy we have FINALLY gotten over this hurdle and that Oliver won't be in diapers forever (ha!). I am thankful for my husband and my girls who were instrumental in potty training our stubborn boy and I can only hope he sticks to the plan and does well at the potty while in school.  I pray that his teachers are patient and understanding when things don't go right and that he can feel supported and encouraged to do better and better every day!
NO MORE DIAPERS!!!!
Posted by Stories of a Happy Mom at 4:31 PM