Because we were in Panama during the girls' actual birthdays, their birthday party was delayed by a couple of weeks and it finally took place this weekend.
It is no secret that I love parties and planning them is especially fun for me.  Ever since the kids were born I said I would only do big parties until Gaby's 5th birthday so this was IT...the last party for a while (or so I say!); of course my husband doesn't believe that I will actually stick to my promise, but we'll see in time; for now I'll just talk about THIS party which happened to be very fun.

I spent months trying to come up with a unique theme; one that would be cute and colorful and VERY far from princesses or Disney characters.  I started with a color combination (pink and green) and then went on to add the tennis theme, which eventually became the center of the party.
A lot of the ideas came from Etsy, which is admittedly my favorite online shop and many other ideas came from my own creations.  I also had a few wonderful friends help me along with the decorations and special touches.
This is a picture of the place where the party took place.  It is called Kubo Play+Party  and it is a wonderful private party center that is chic and modern; their service is exceptional and their food is incredibly tasty.  I really enjoyed holding the party at this venue and would definitely use it again! 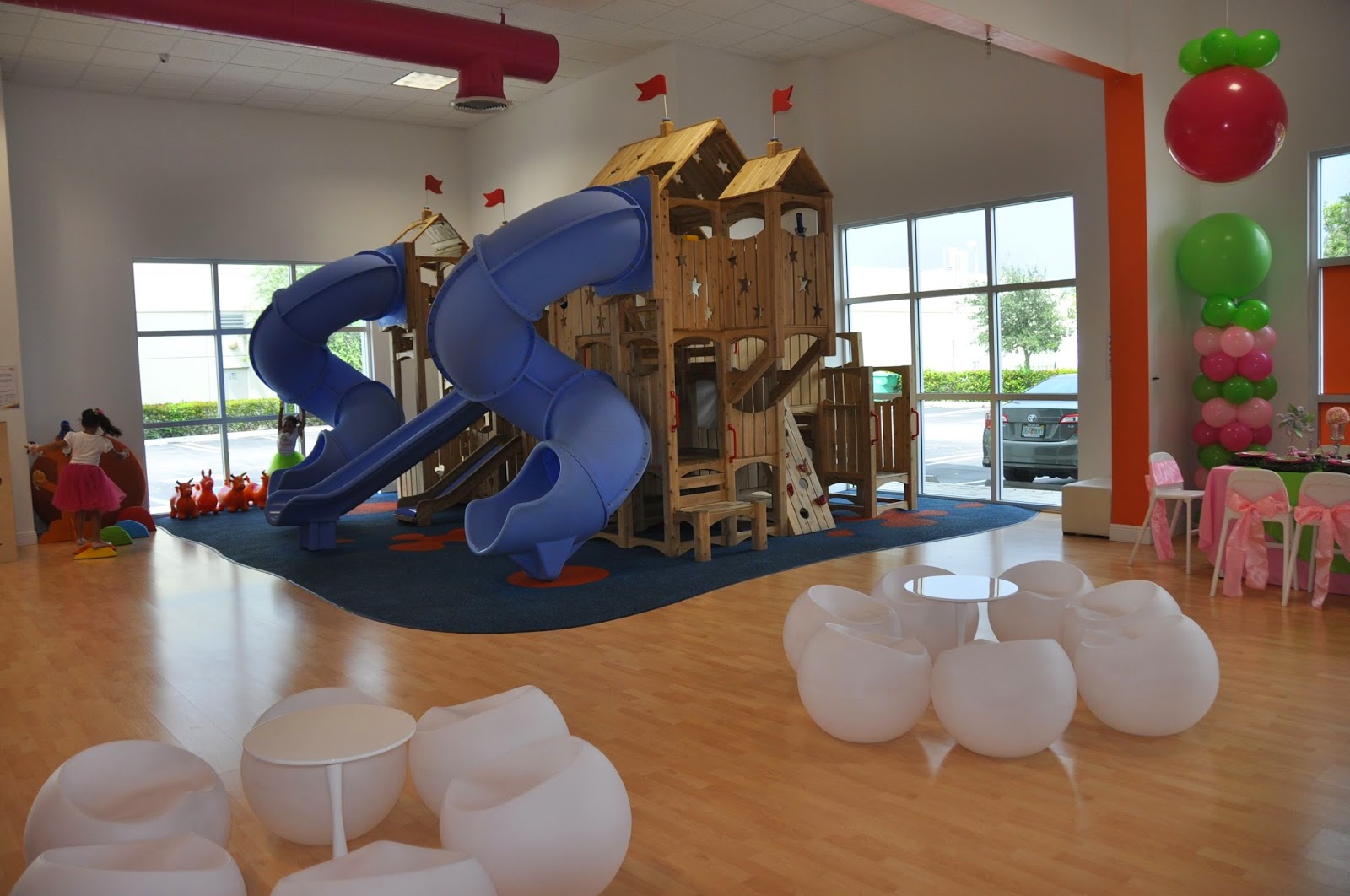 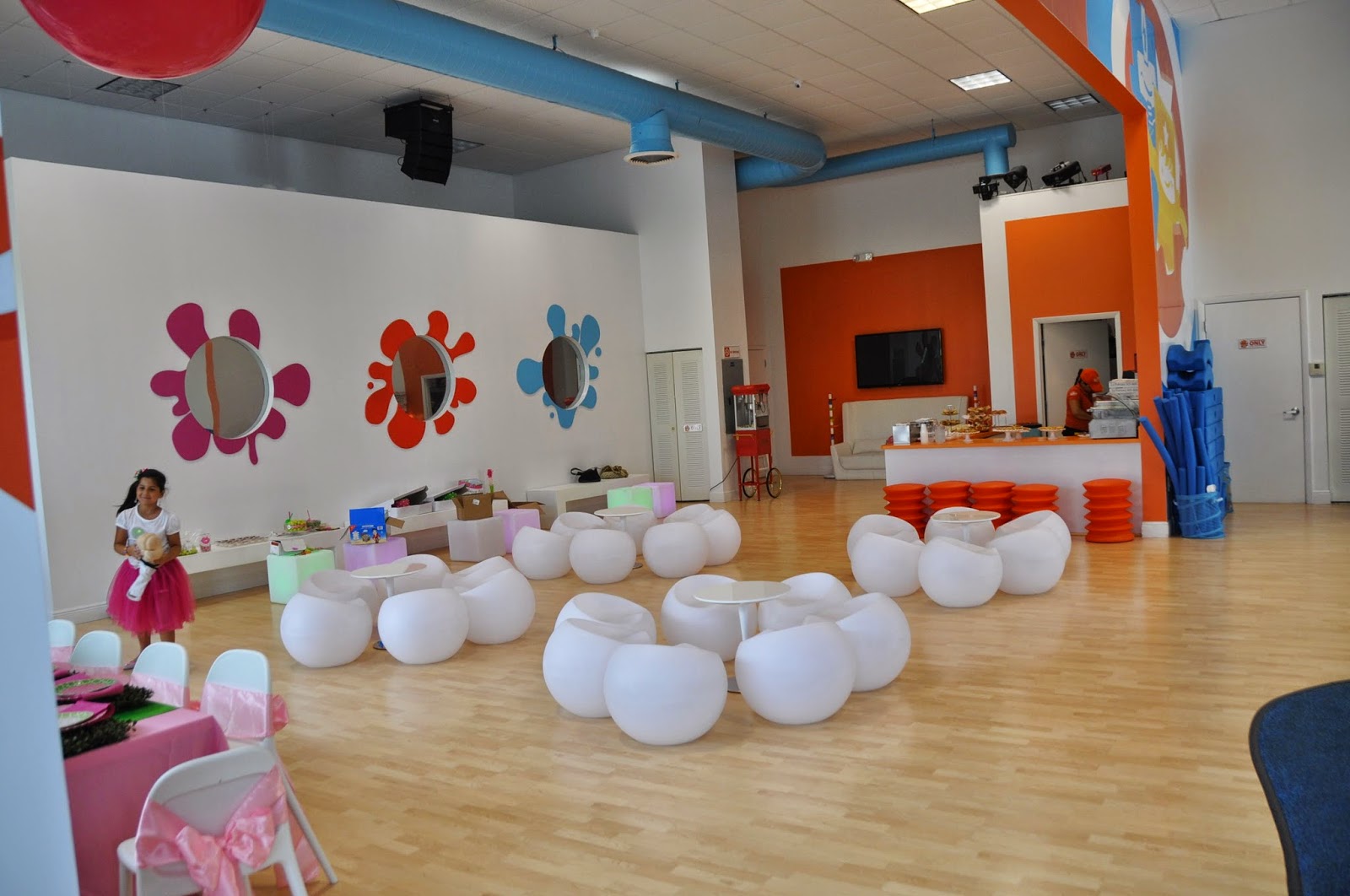 Here are some pictures of the "main" table, which features my pink and green tennis theme. 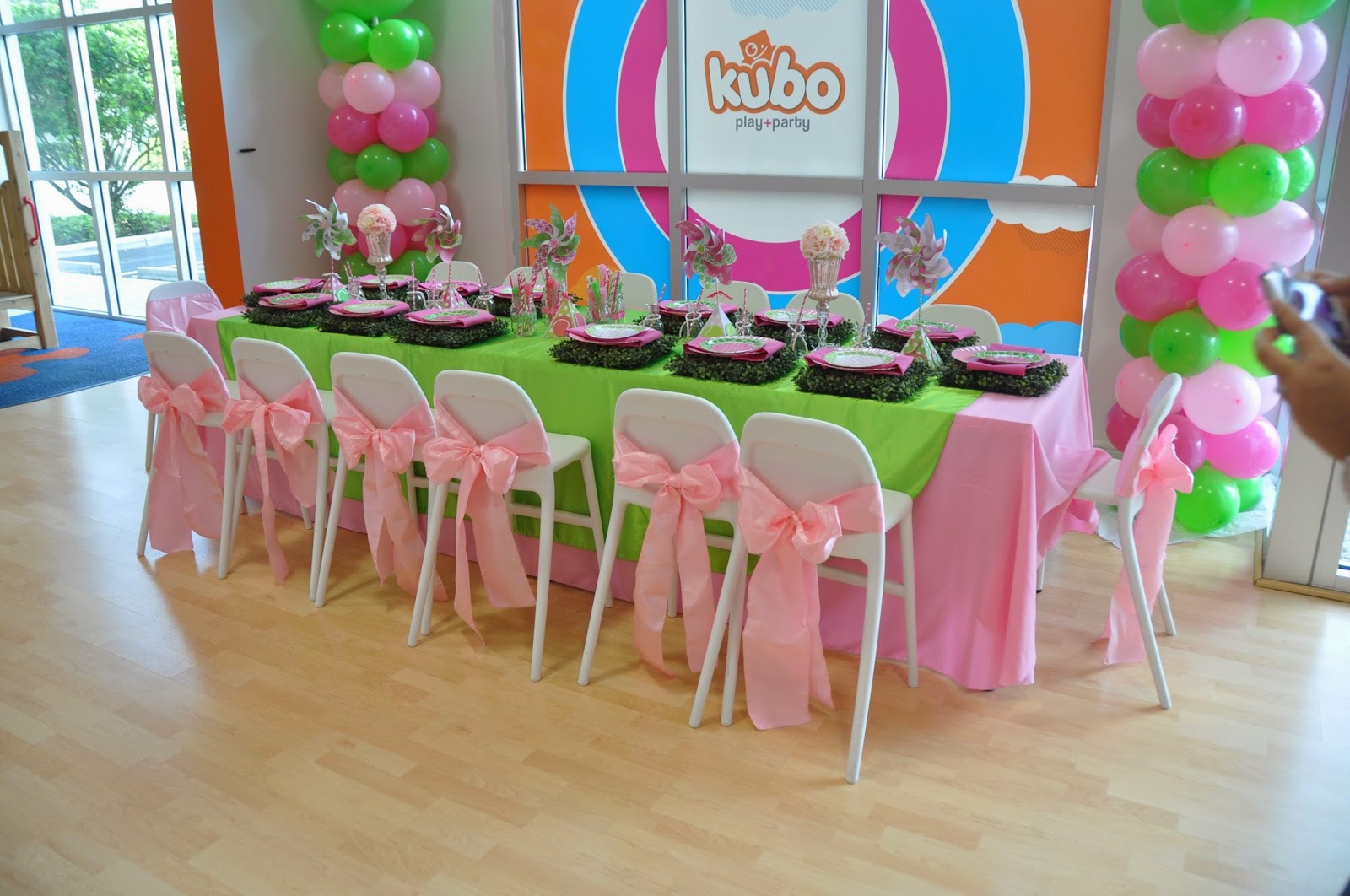 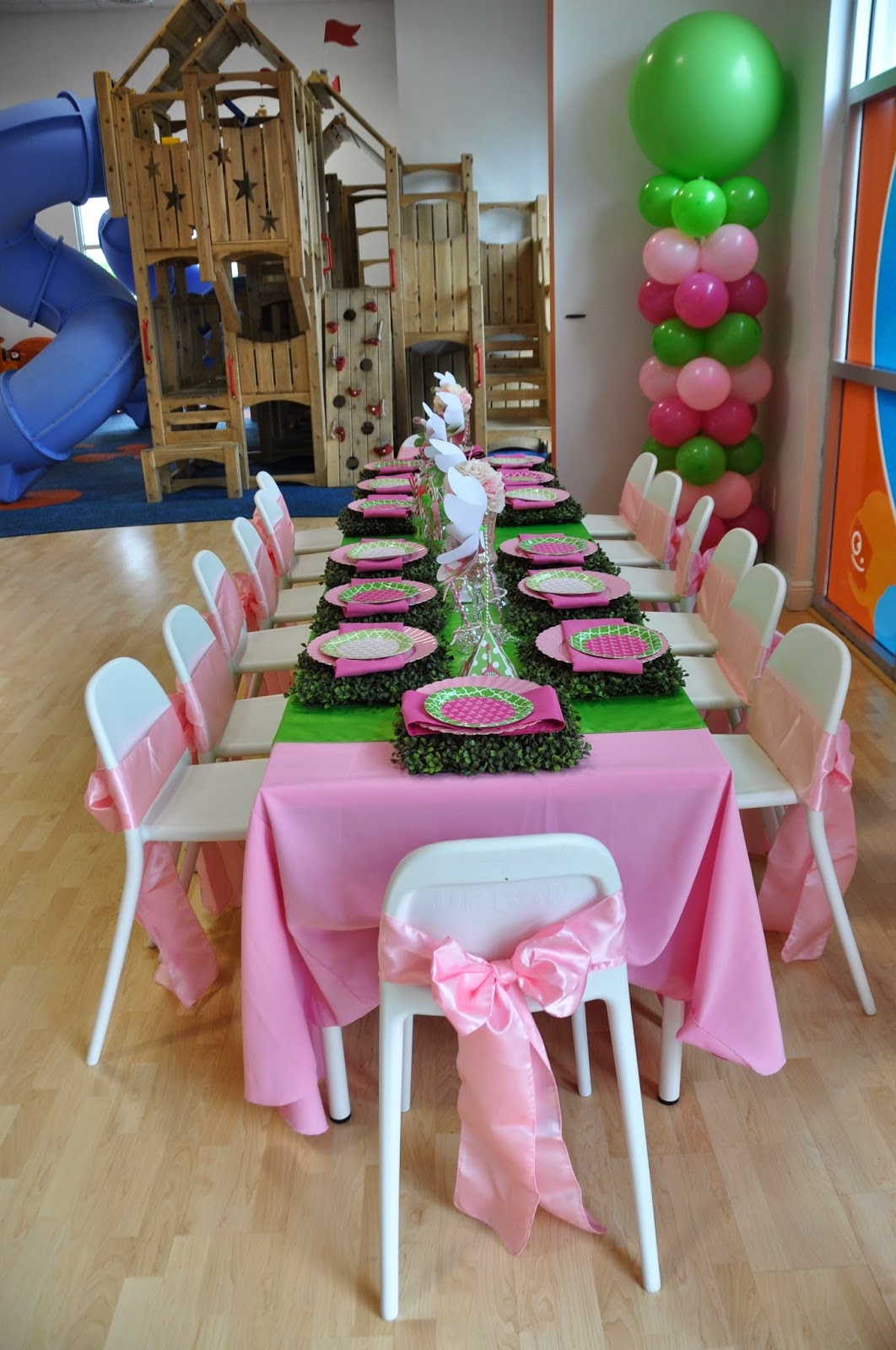 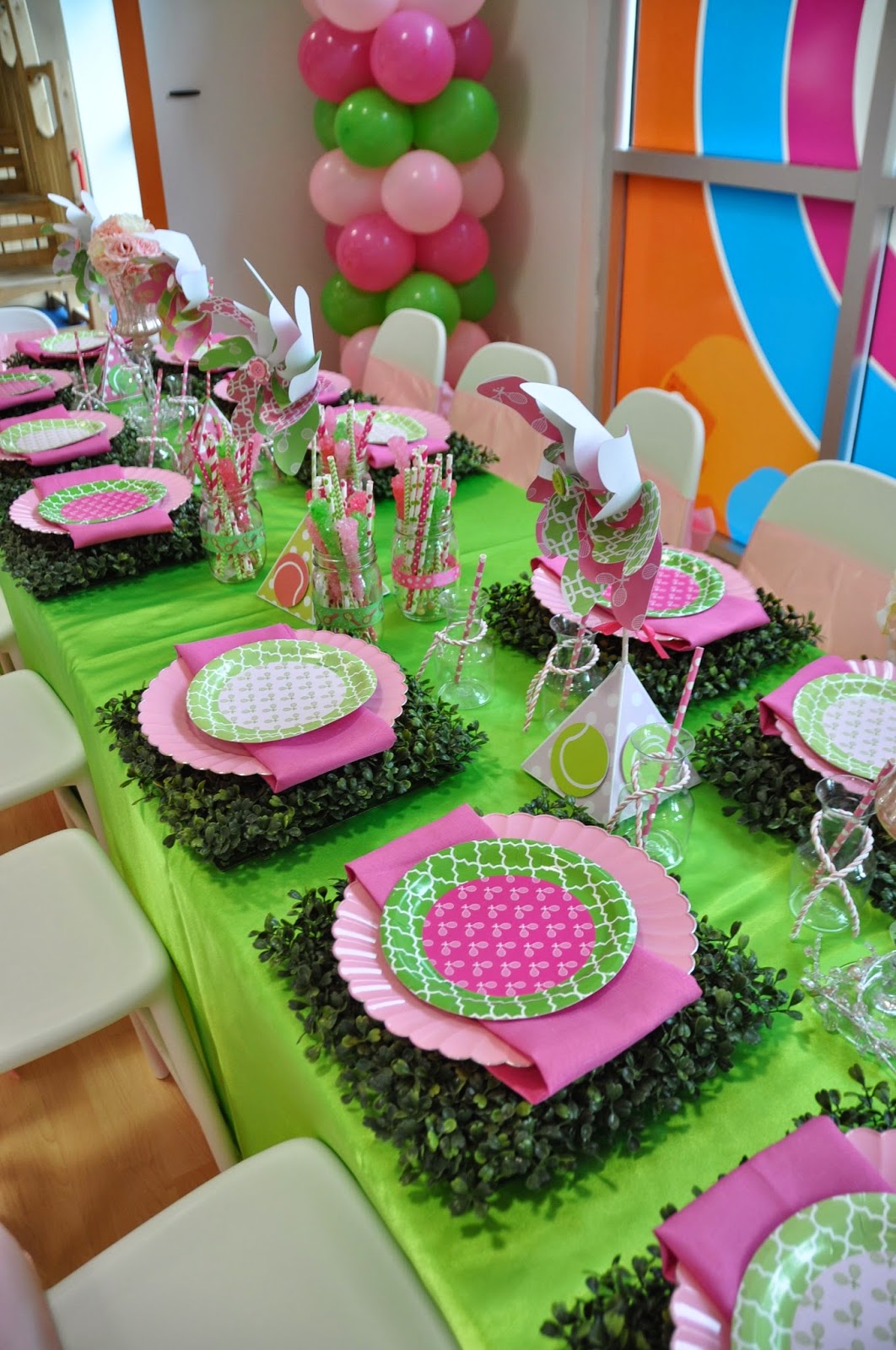 The centerpieces are pinwheels made with scrap paper, which I ordered from an Etsy shop; I asked the owner to create some tennis themed scrap paper and she came up with wonderful digital designs which I later used for other decorations and party items. 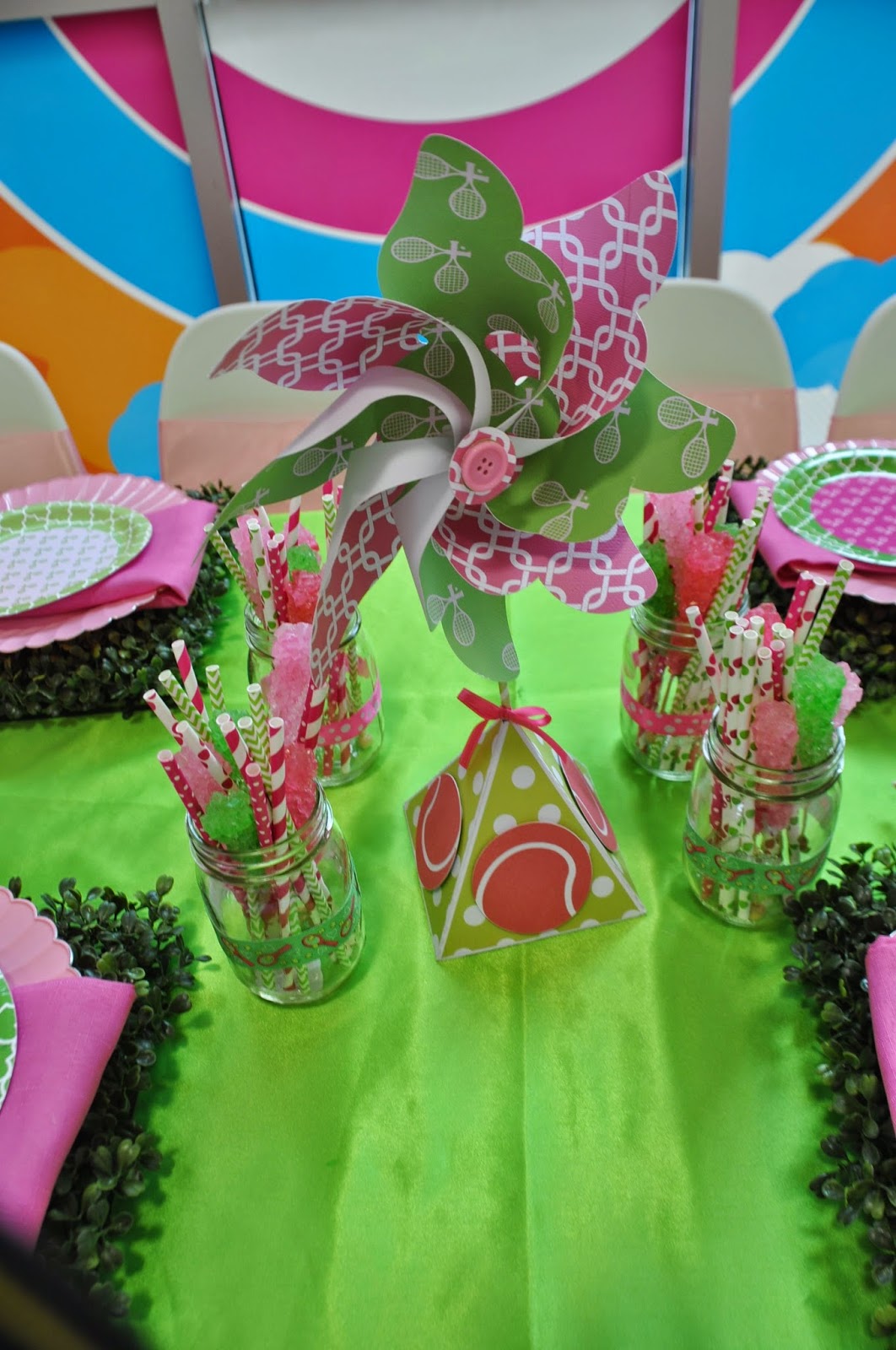 The delicate pinwheels were created by a fellow blogger (Kristin), who was gracious enough to work with me on further developing the concept I had in mind.  You can find Kristin's blog here and check out her post on how the pinwheels were made.  I am very happy to have found Kristin in one of my Google searches; she was nothing but pleasing and extremely helpful and her work was high quality and perfectly executed; so perfect for our party! 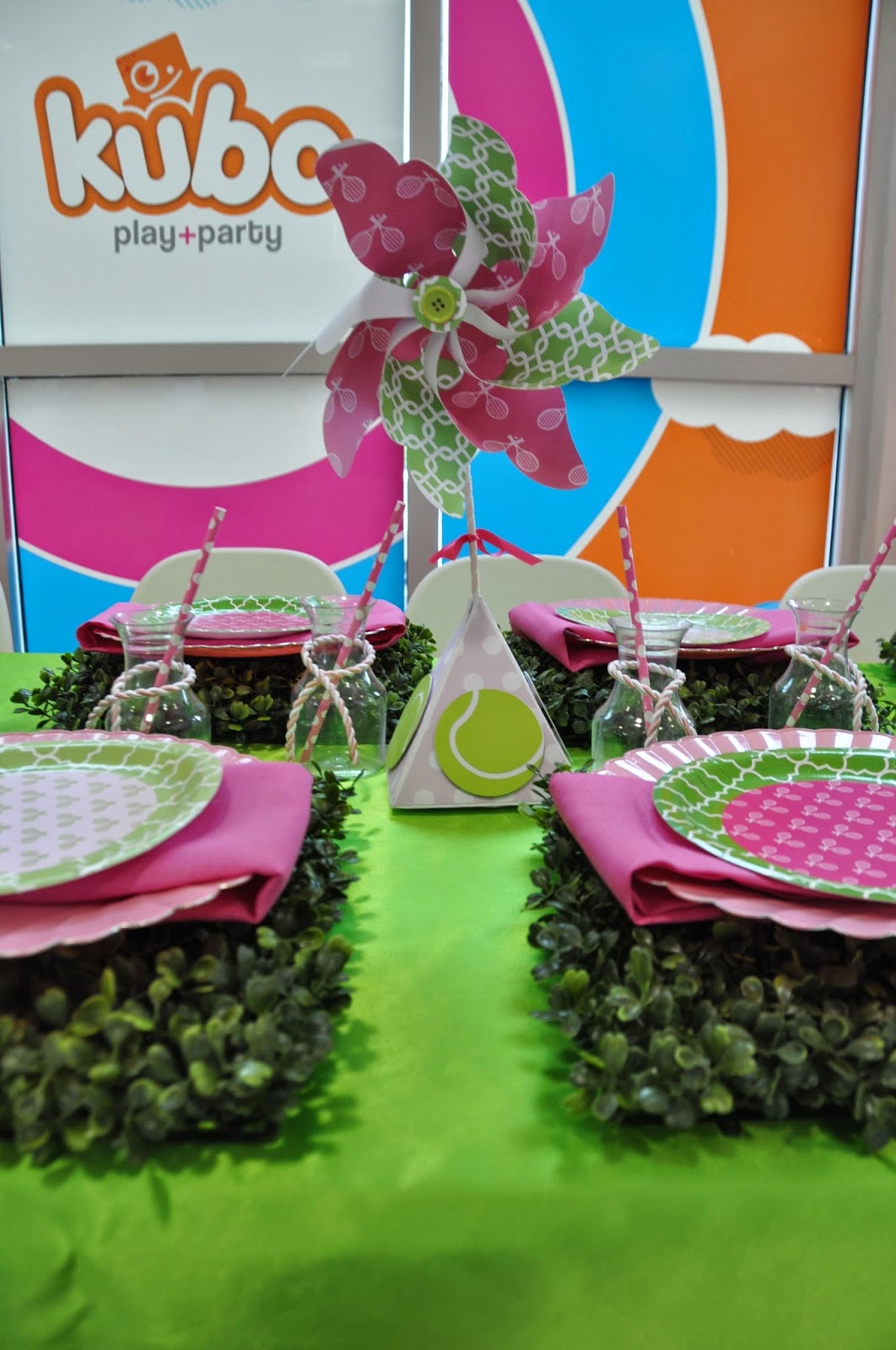 The plates were also custom made using the same digital designs created on Etsy.  I ordered the plates from Shindigz party supplies, which is an amazing site that offers personalized party items among other things.  The plates added a special touch to the party and I am glad I included them in my concept. 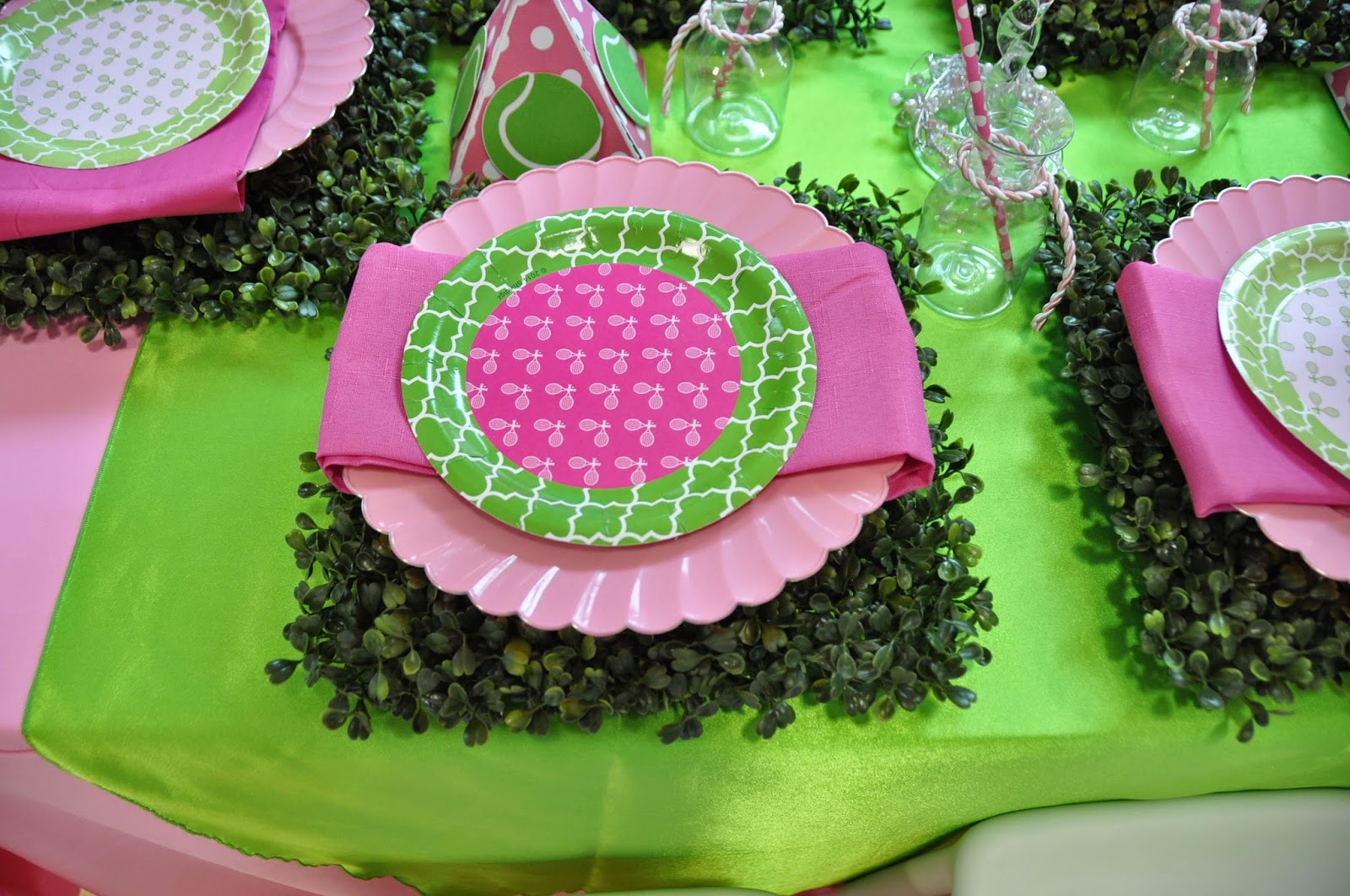 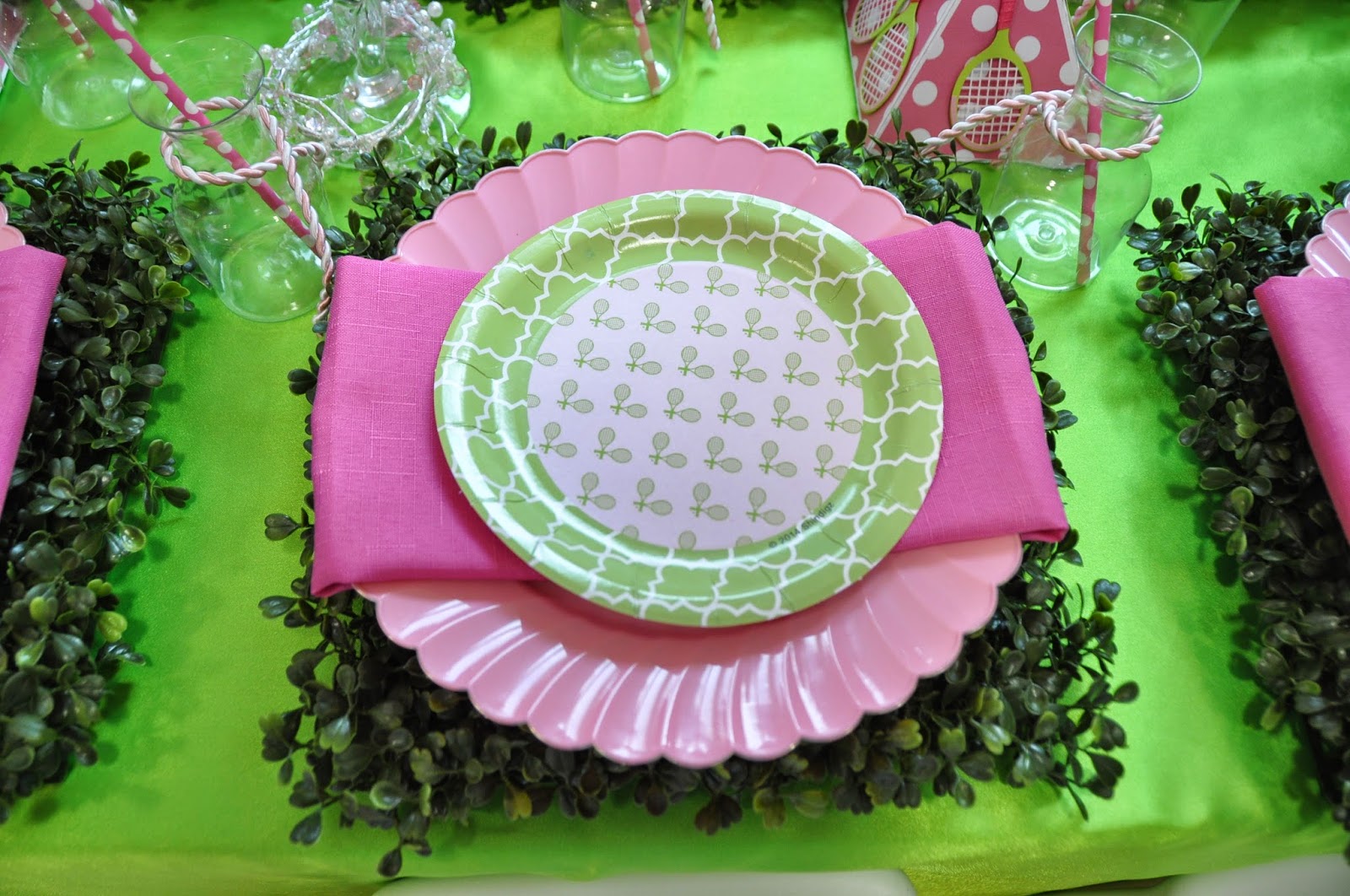 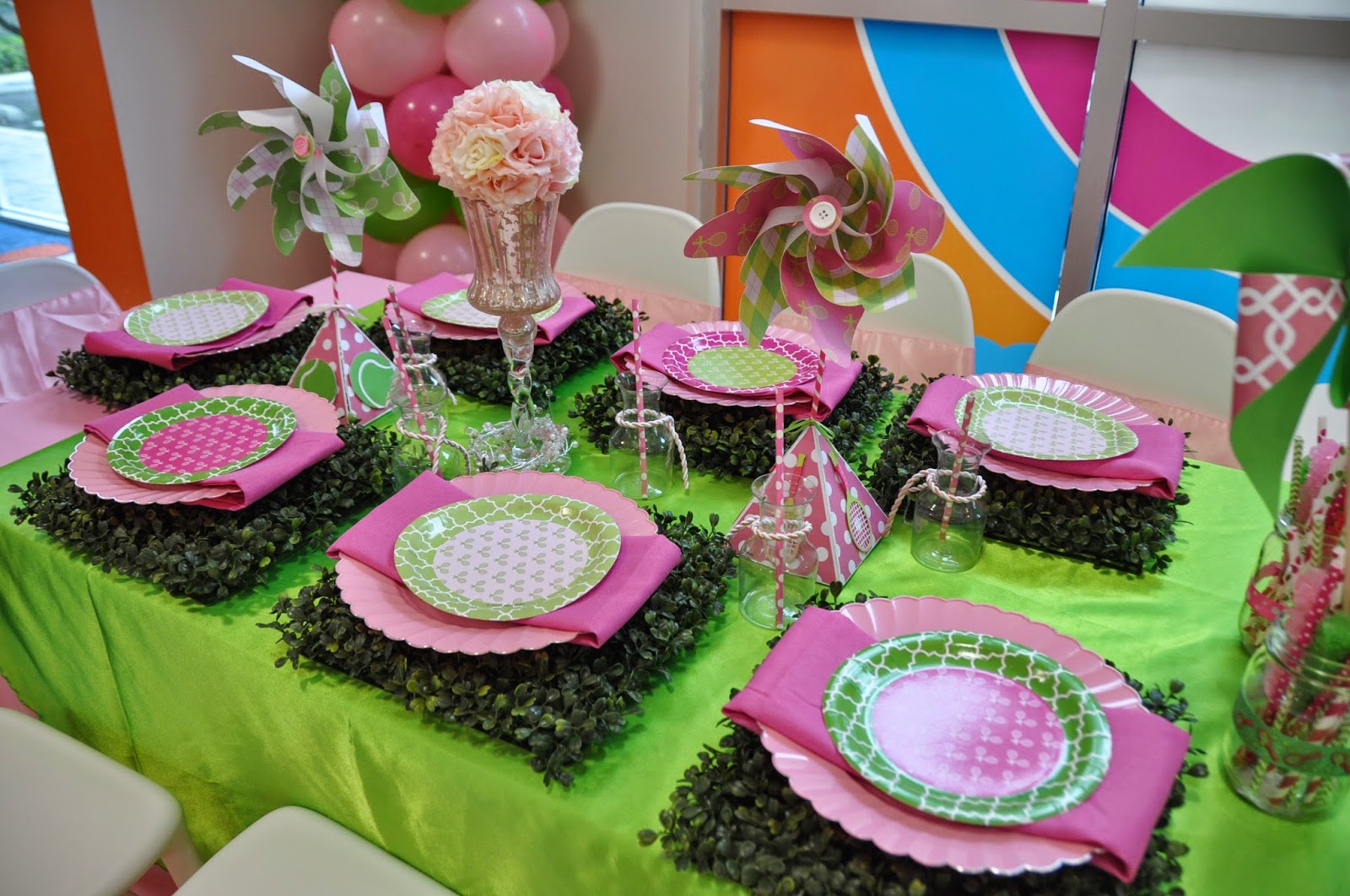 The party also featured several balloon decorations including an arch containing all the party colors, balloon columns and giant balloons hanging from the ceiling. I added several tennis racquets that were suspended in the air hung from the ceiling as well.
Here's a picture of the girls by the main party table. 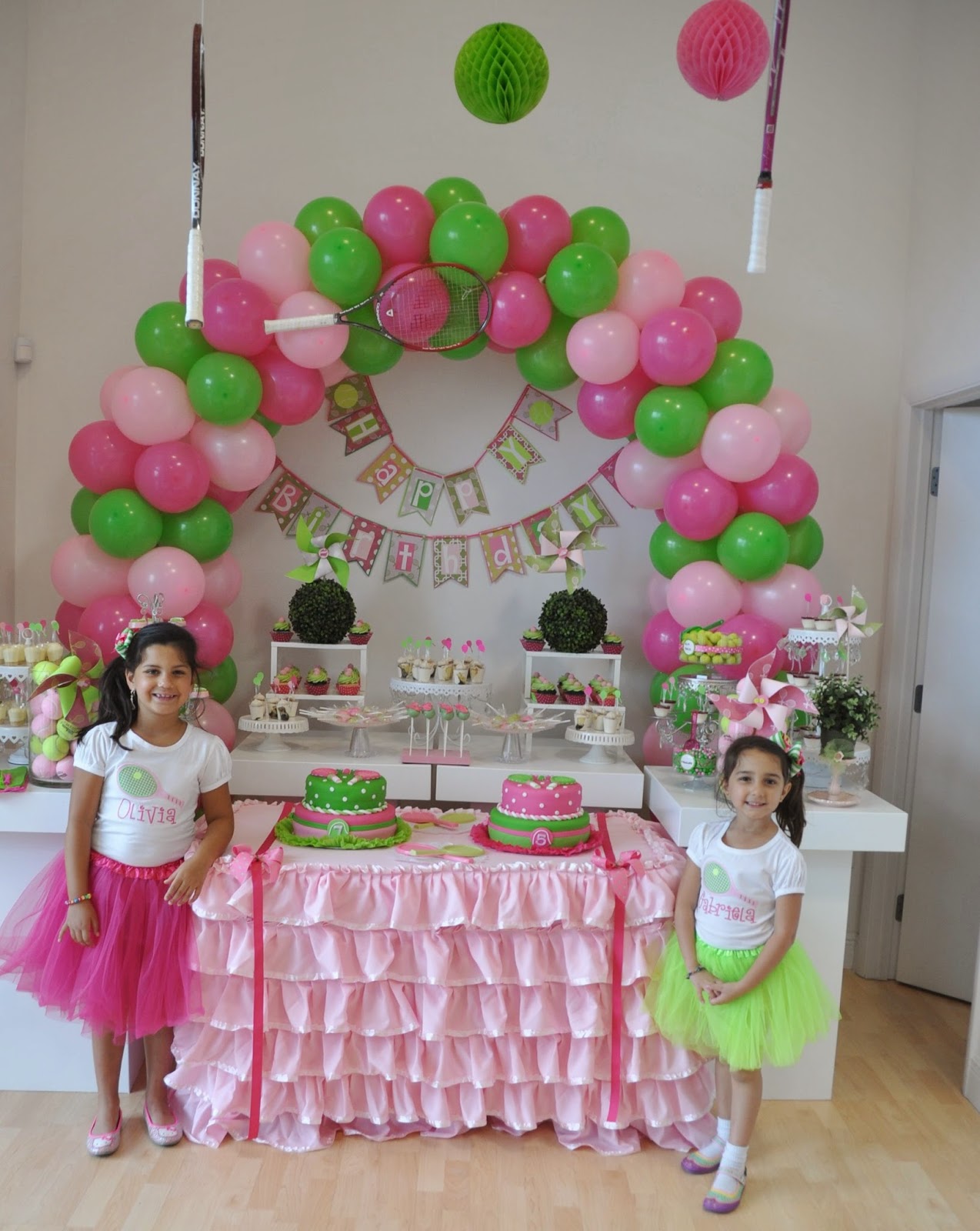 I purchased two glass cylinders and filled them up with green and pink tennis balls.  On each cylinder I added simpler pinwheels graciously made by my friend Stacey; these pinwheels were also created using the same custom made scrap paper I purchased on Etsy.  Please check out Stacey's shop here. Stacey also created the birthday banner which hung below the balloon arch. 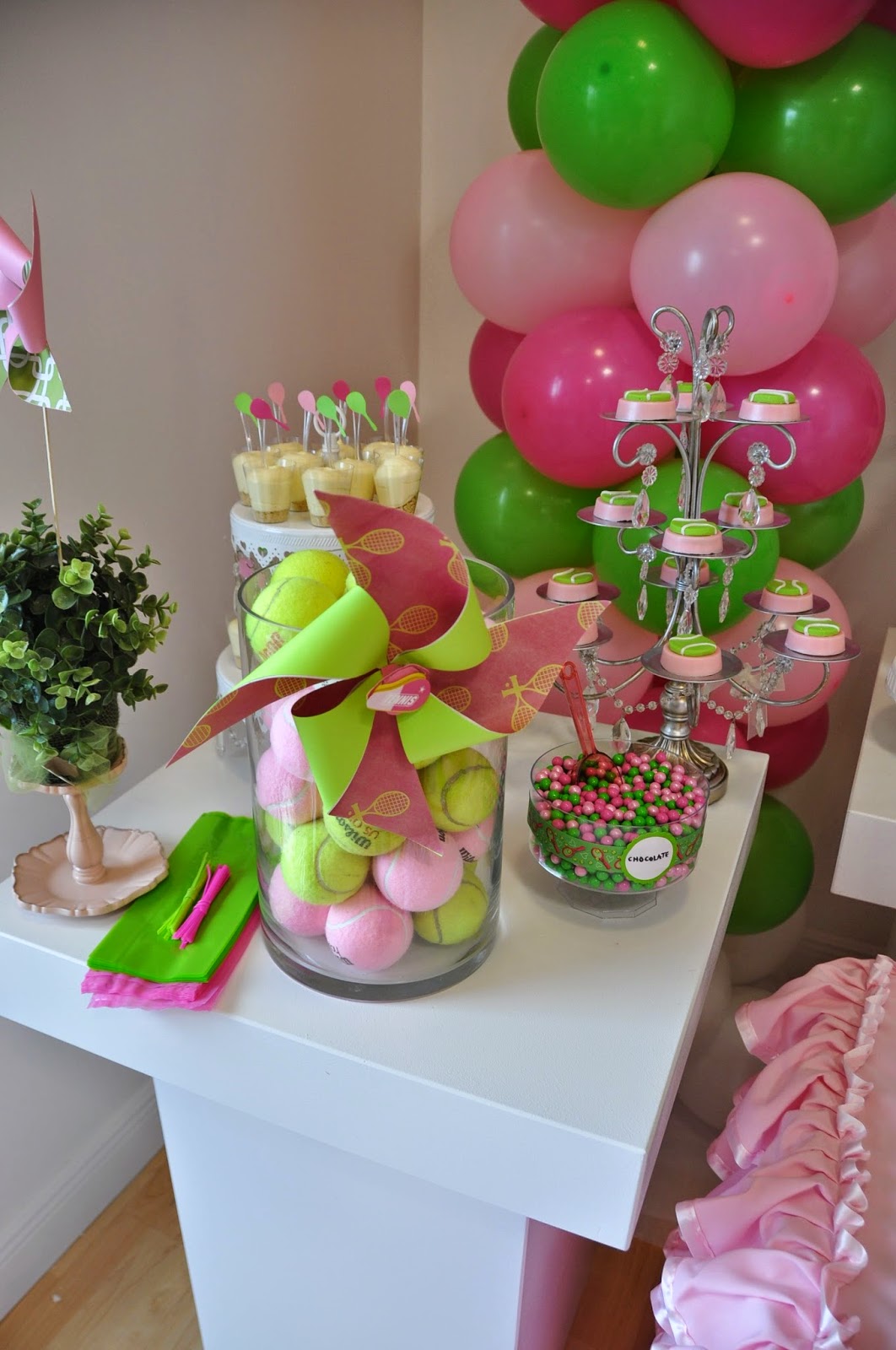 This is a picture of the beautiful cakes made by my friend Jenny.  The cakes were delicately made out of fondant and carefully decorated with the theme and color of the party.  They had caramel and Nutella filling, which made for some yummy cakes that everyone enjoyed very much. 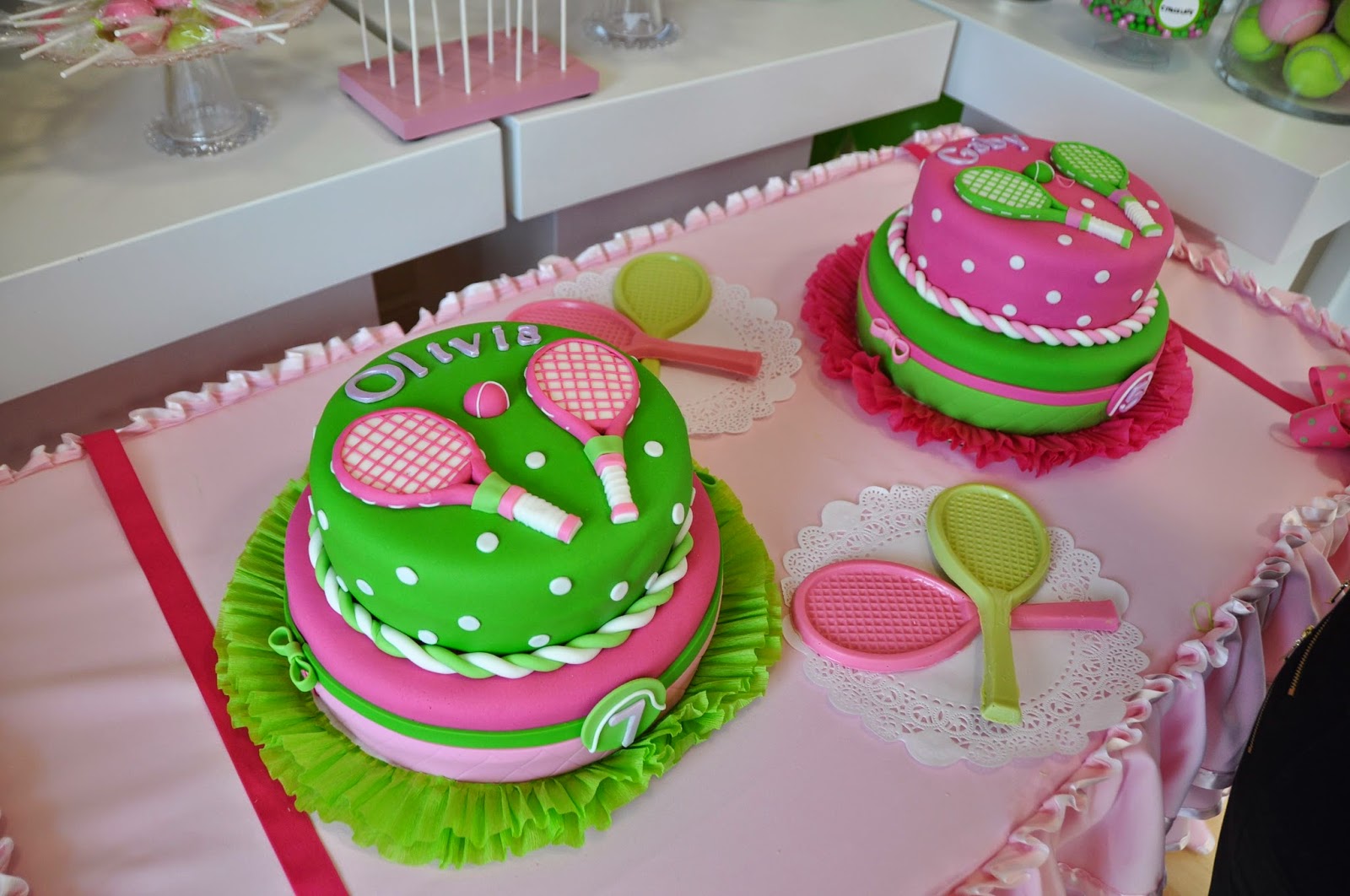 I add the option of a personalized "dessert station", which featured
small desserts carefully made to match the party theme.  Here are some picture of some of the desserts and table decorations that were featured on the party table.  I also handmade chocolate pops and chocolate tennis racquets (pictured with the cakes) 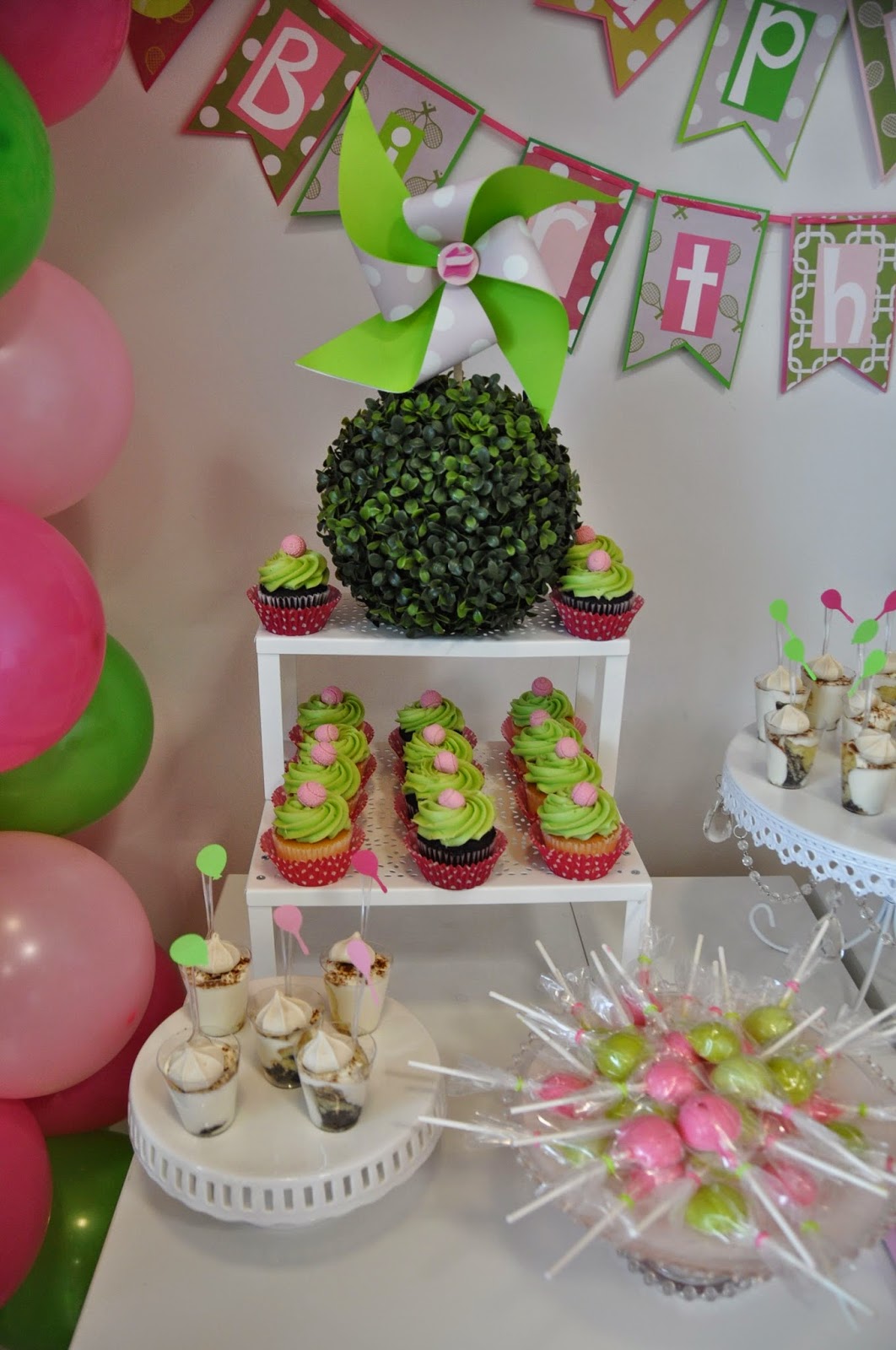 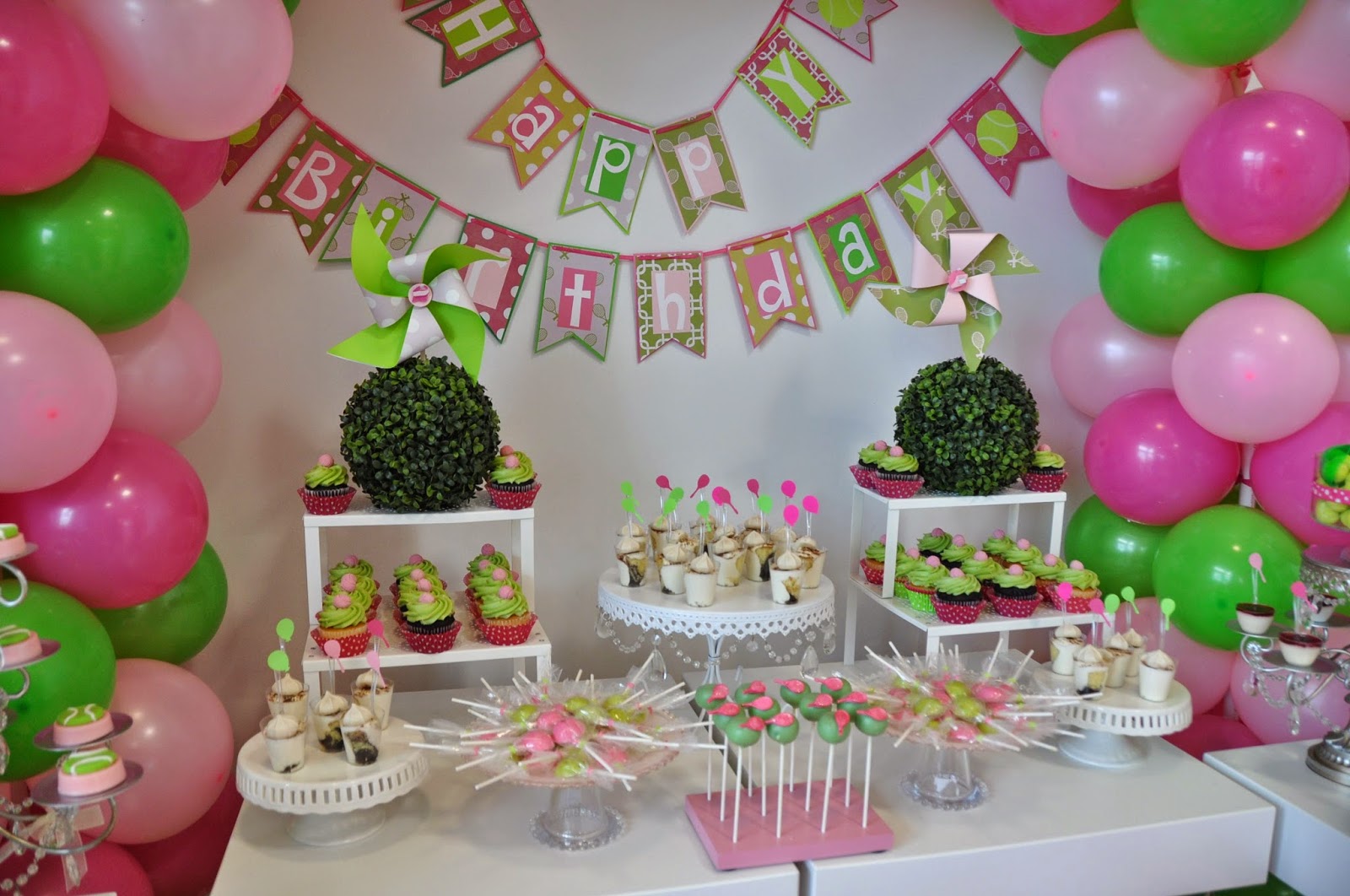 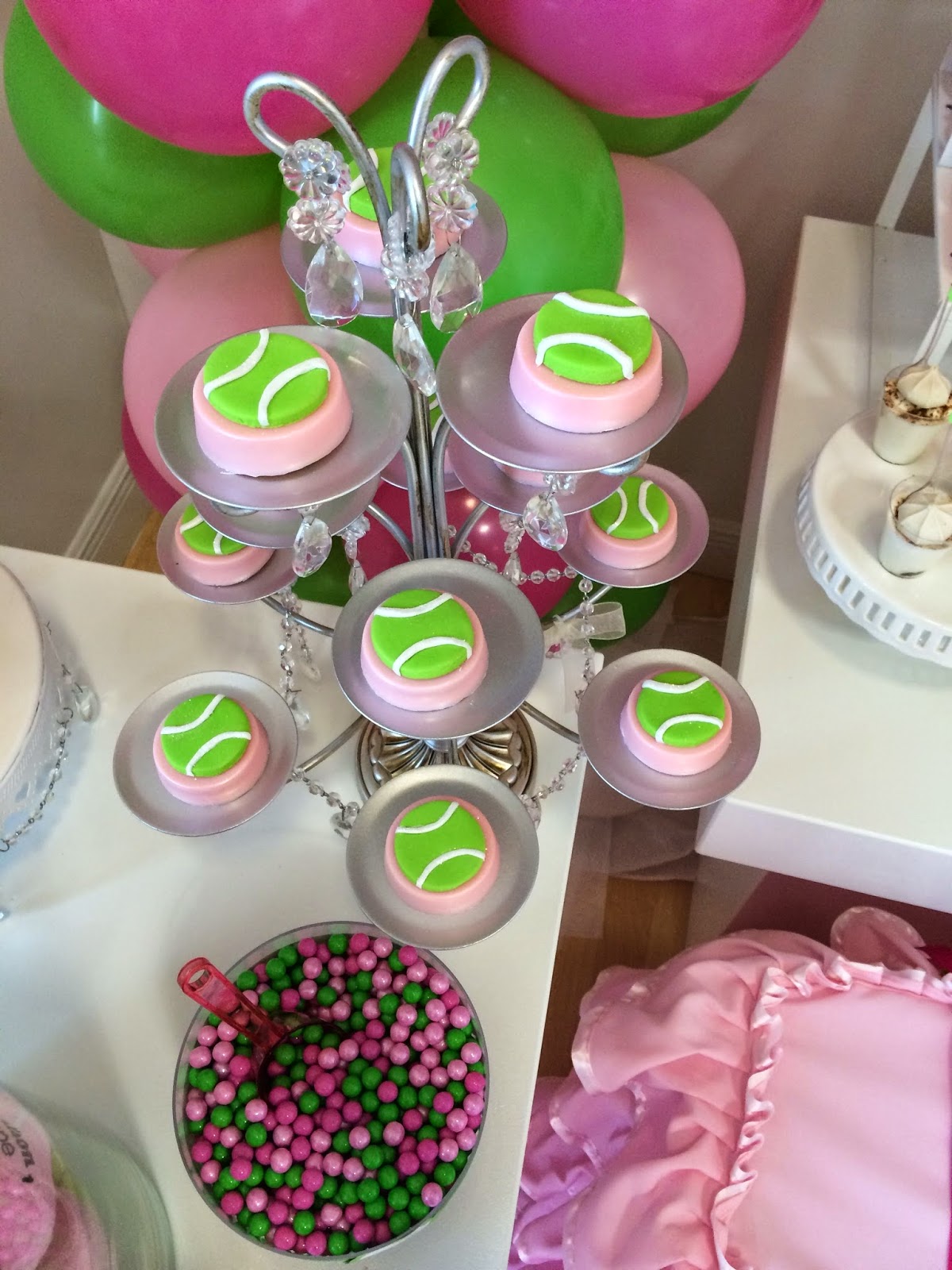 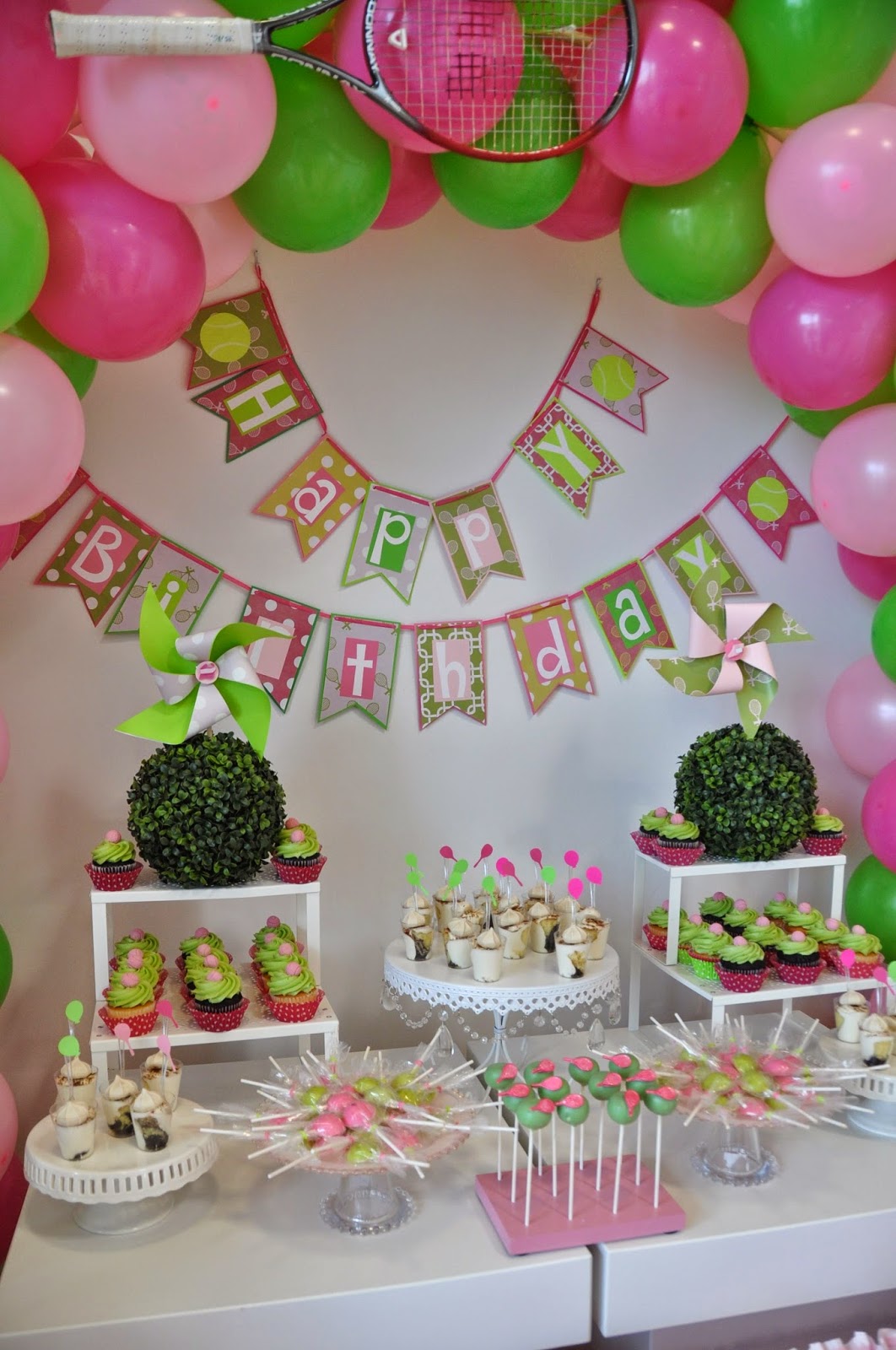 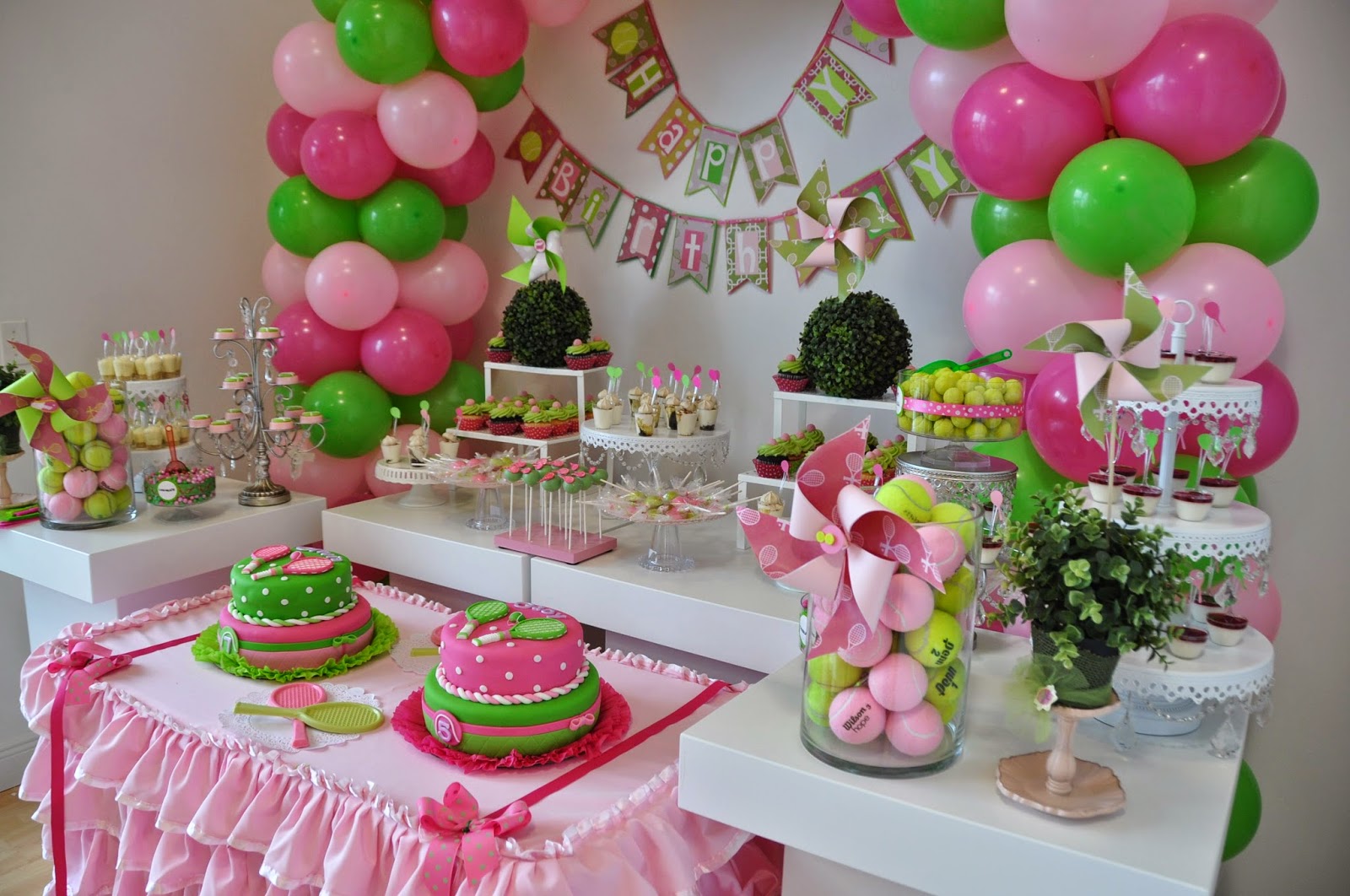 The girls shirts were purchased off Etsy as well; they were designed and sewed by Sewcially Chic , which is another awesome shop that makes the most beautiful designs. The shop owner was specially friendly and her work was impeccable.  To pair the beautiful shirts, I bought green and pink tutu skirts from IngridElizabethTutu (another Etsy shop); these tutus were bright and soft and they were the perfect complement for the outfit. 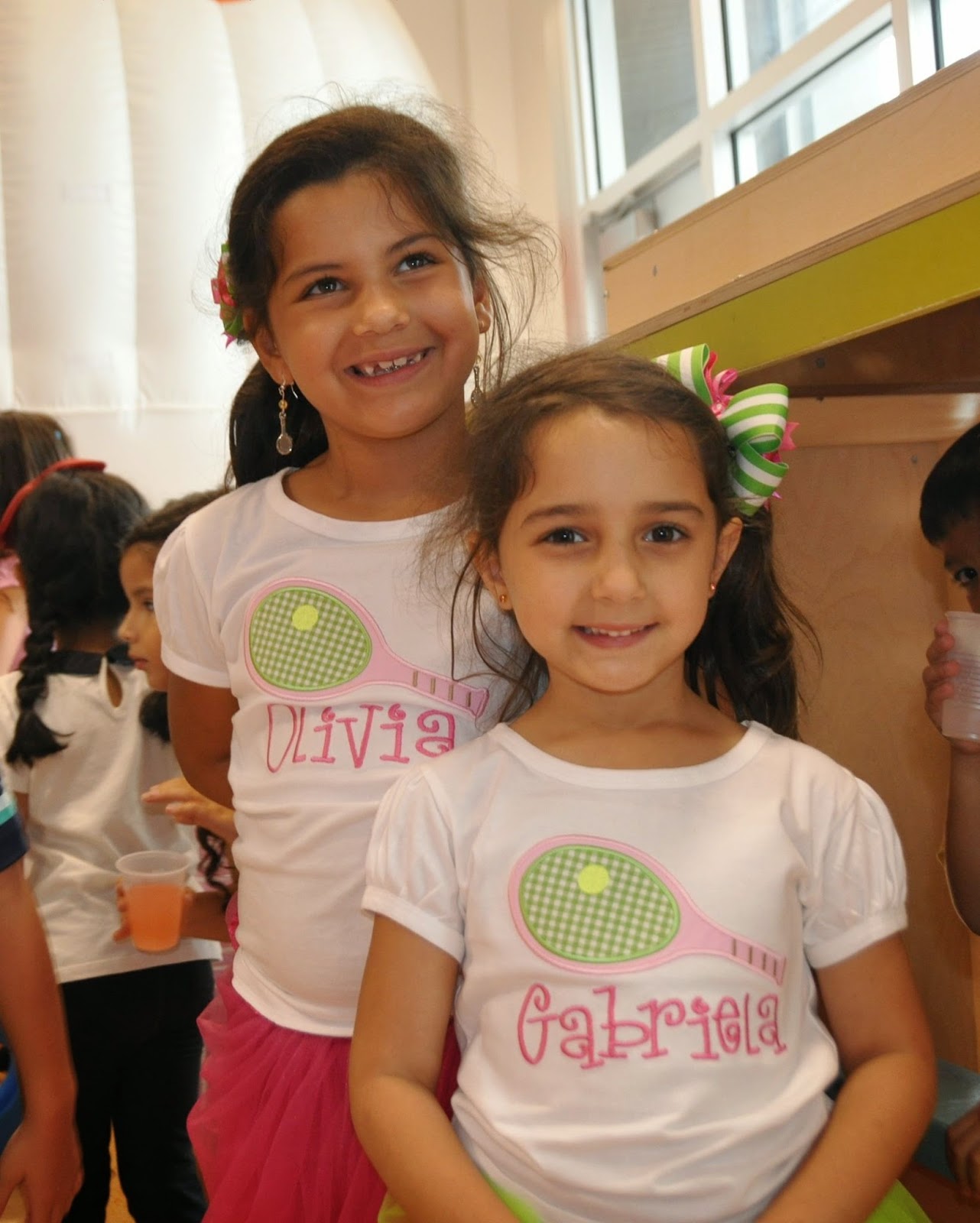 The girls also wore homemade hair bows that matched their outfits; I purchased the ribbon on Amazon and had the RainbowDayHappy shop make me a polymer clay pink tennis ball to add as a bow center. 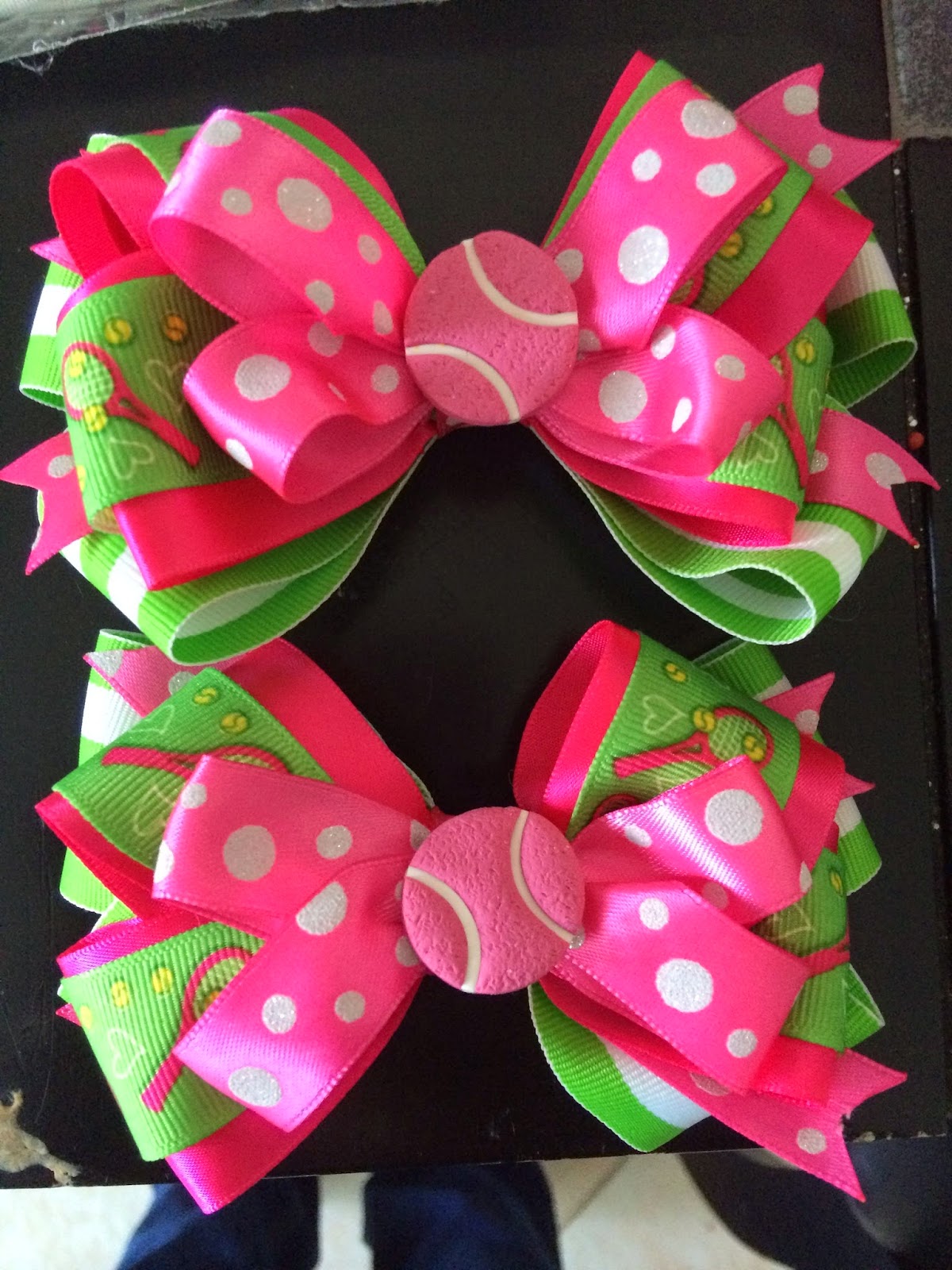 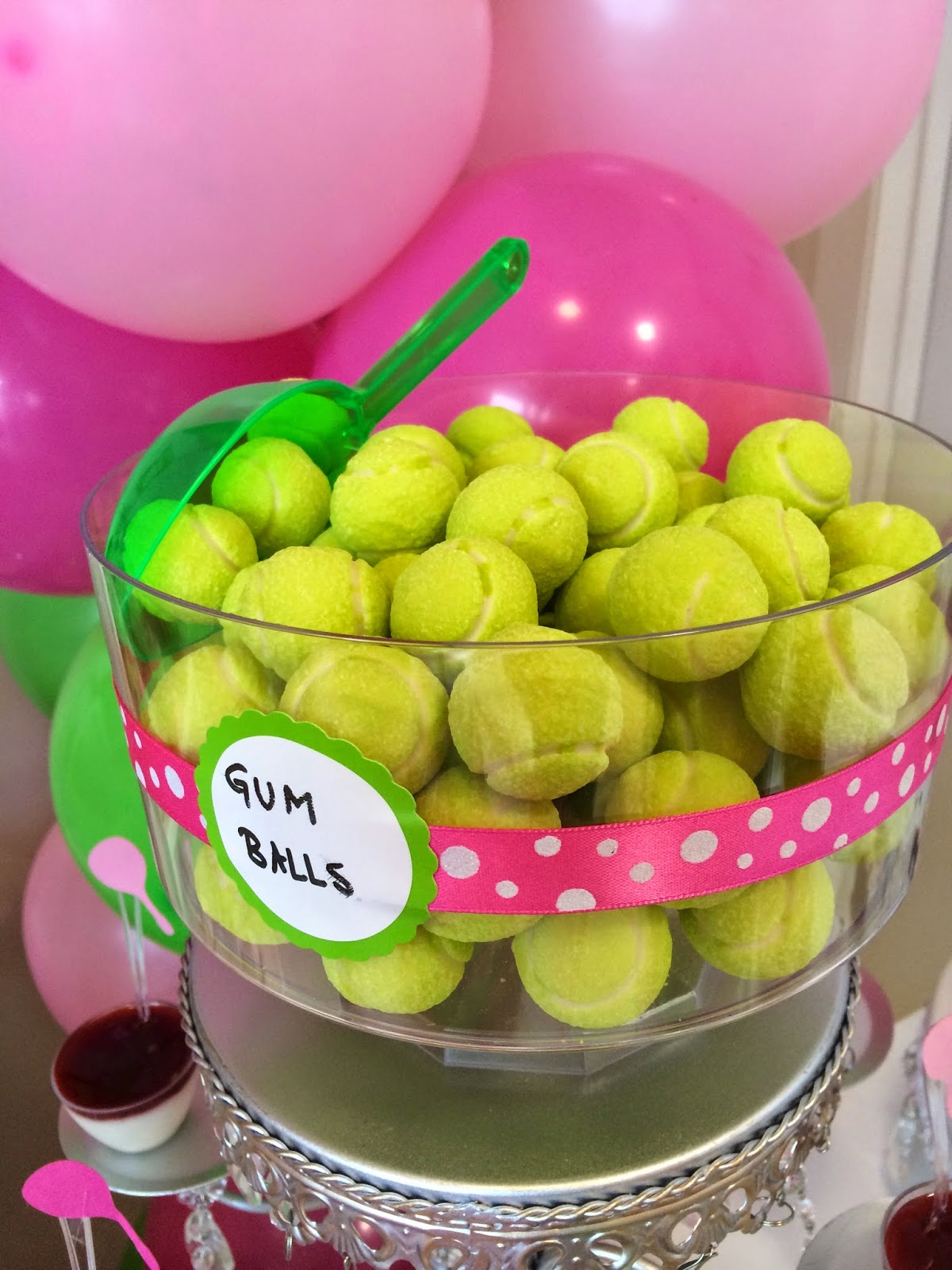 Here are the chocolate pops and cake pops that I made and decorated. 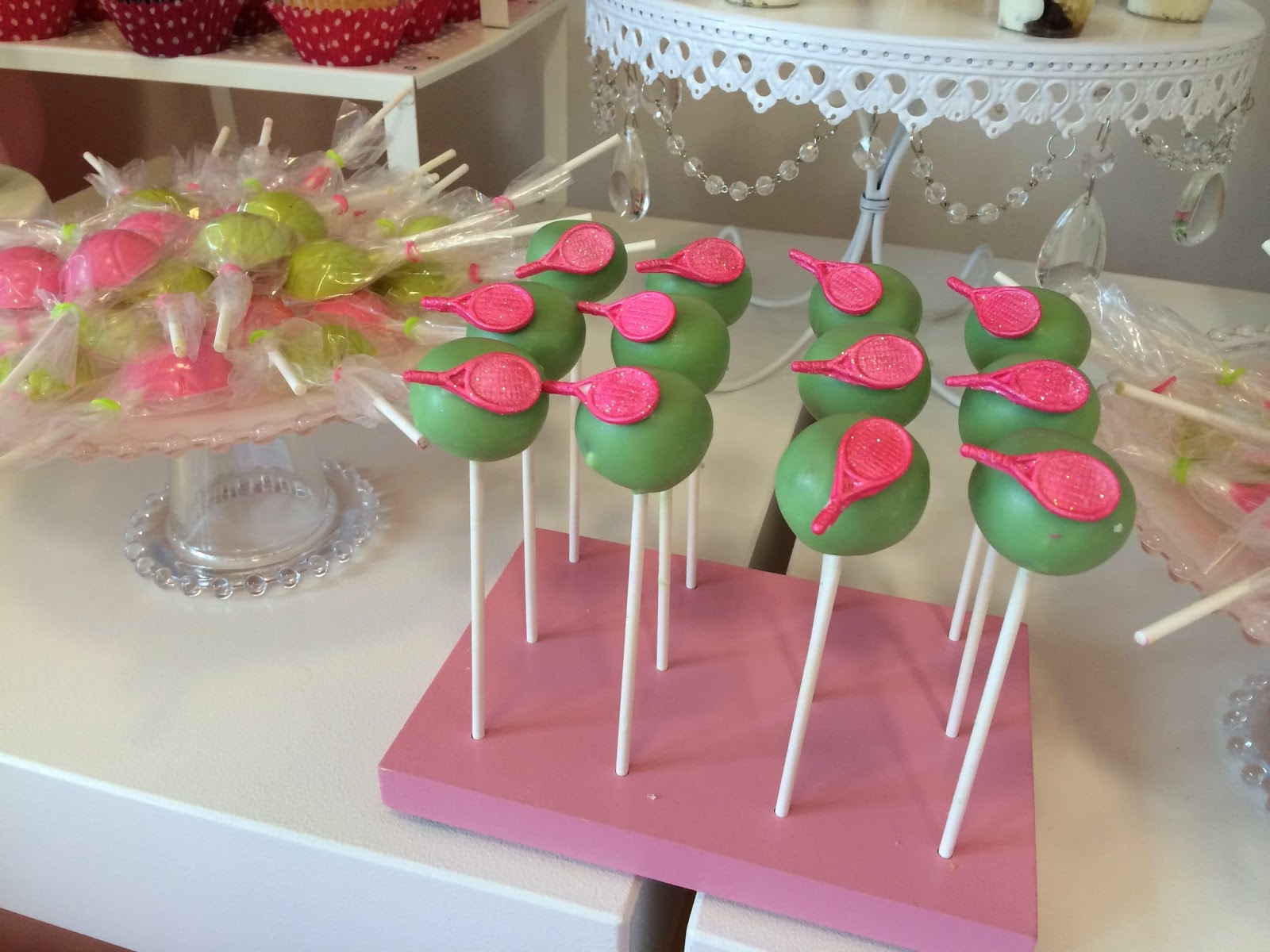 And some of the pink and green cupcakes that also followed the party's theme.  The cupcakes are topped with a small pink tennis ball gum, purchased from Sugarpova, which is a candy line created by famous tennis player Maria Sharapova. 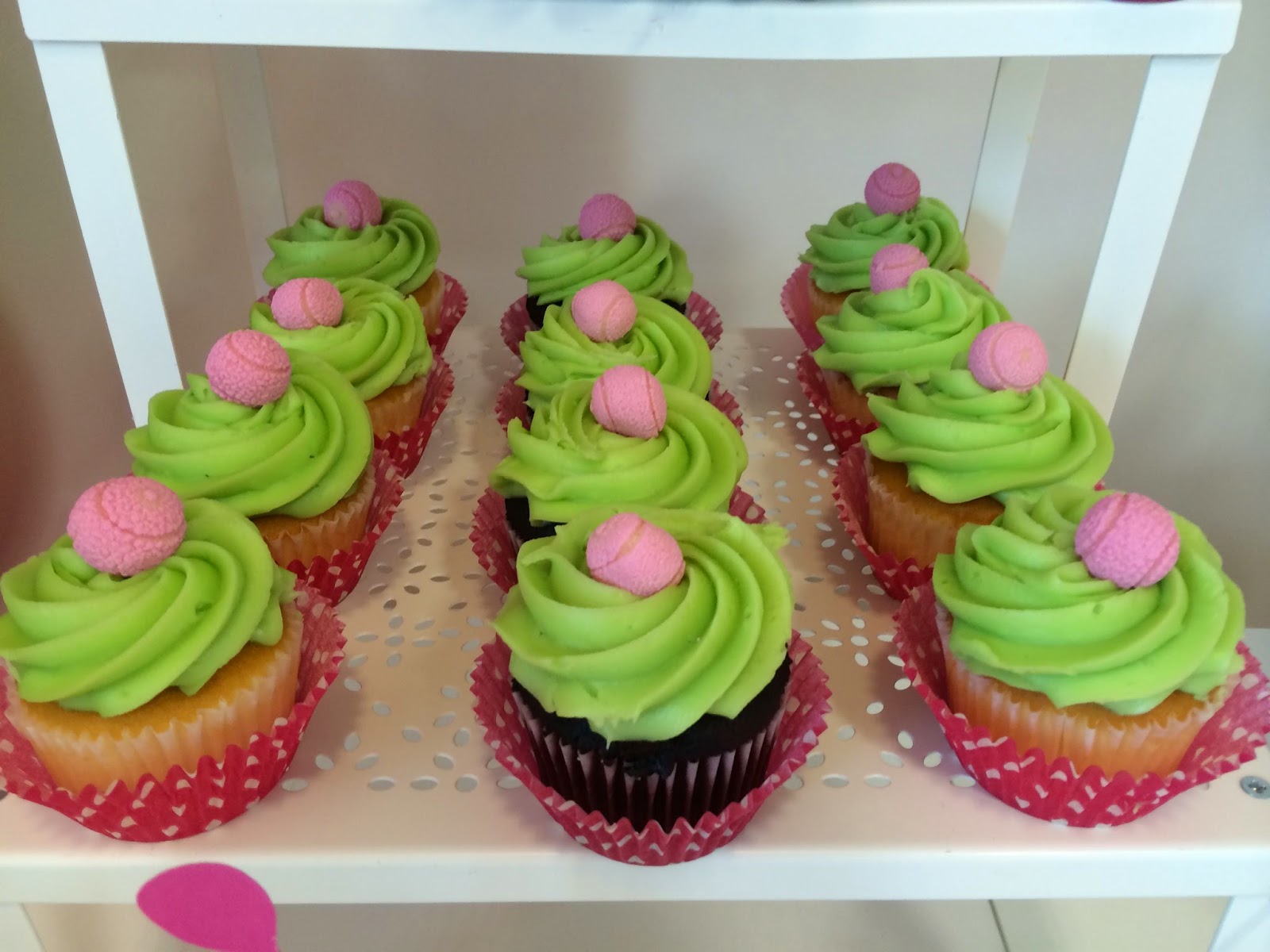 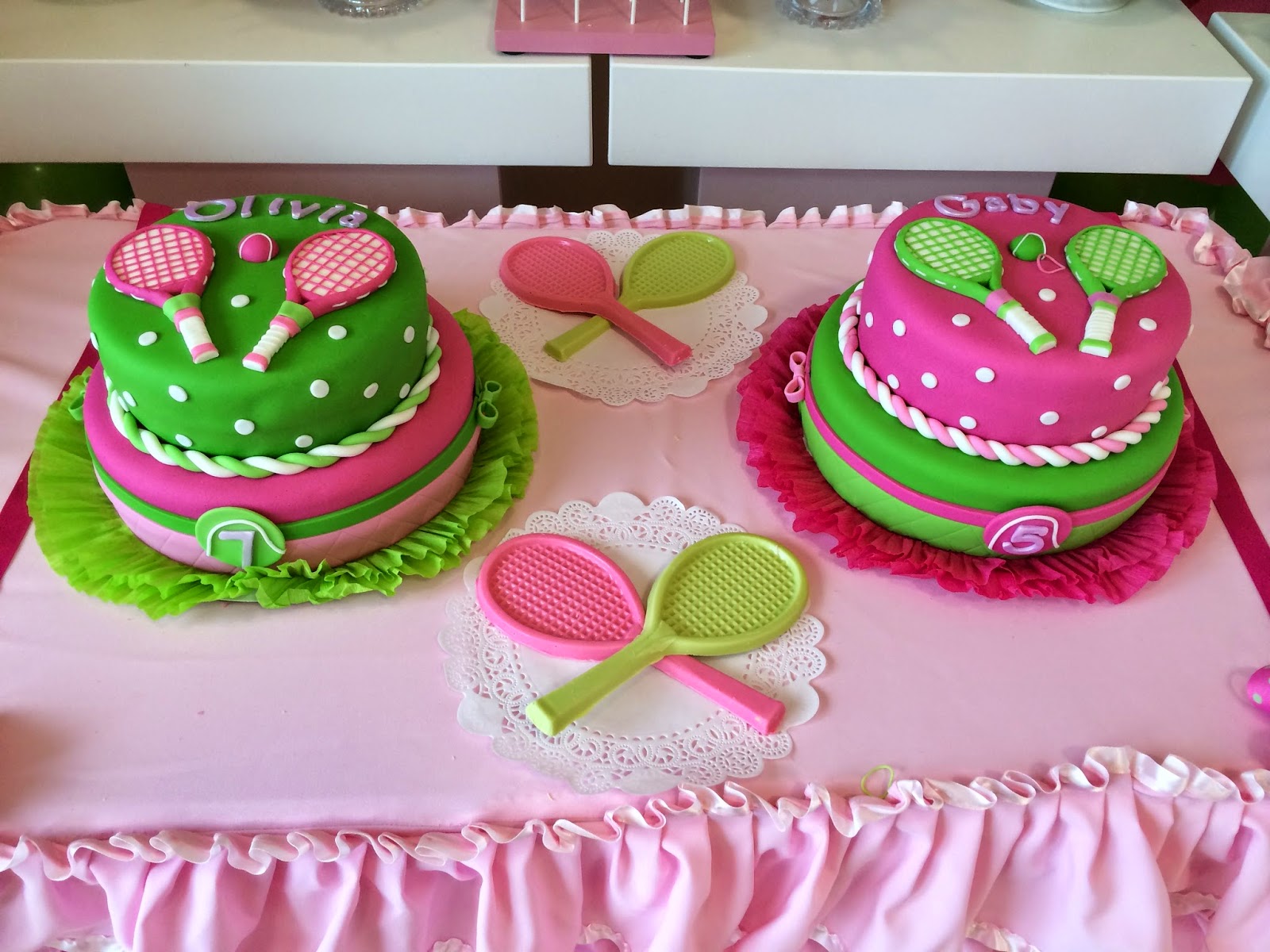 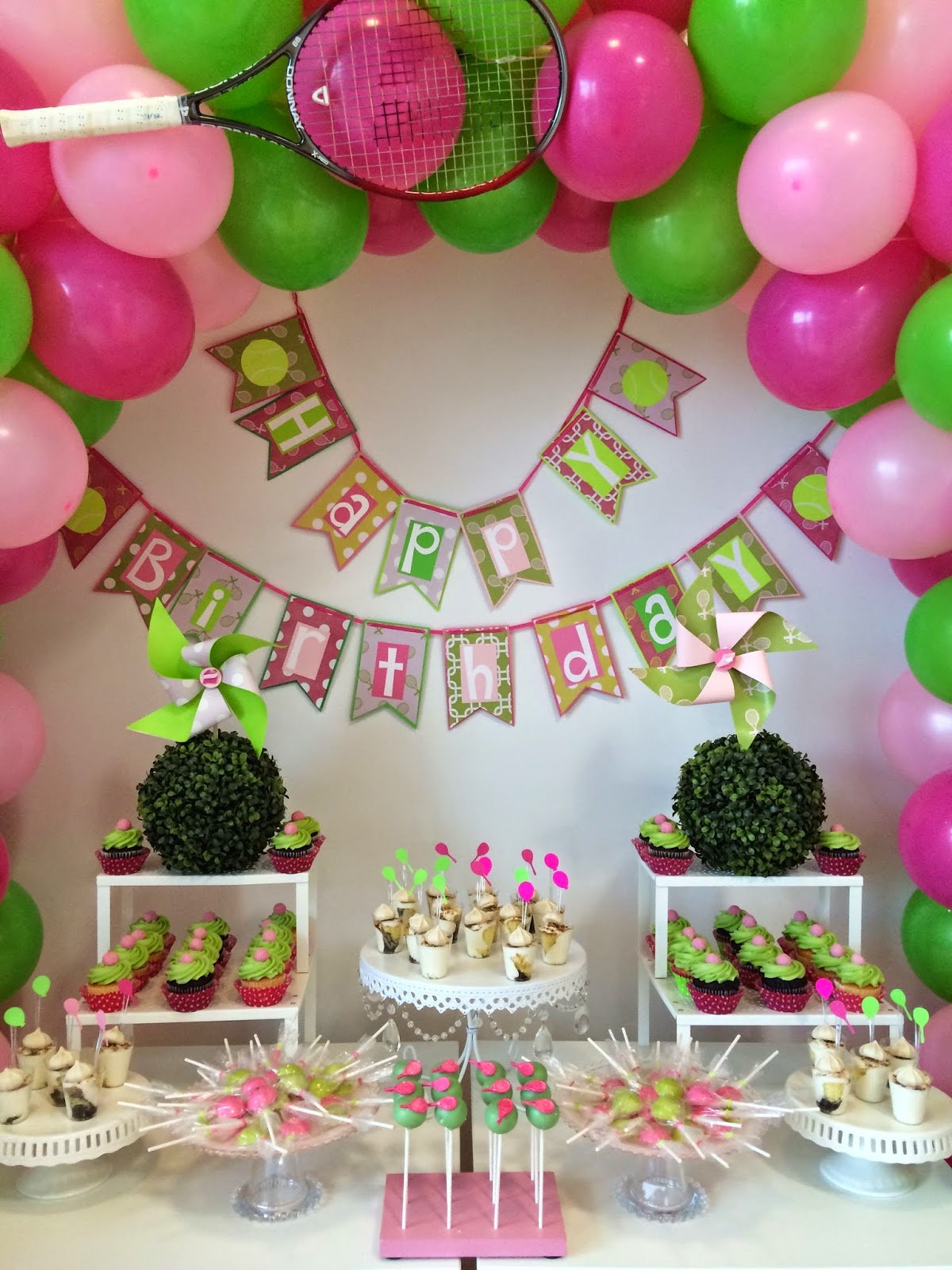 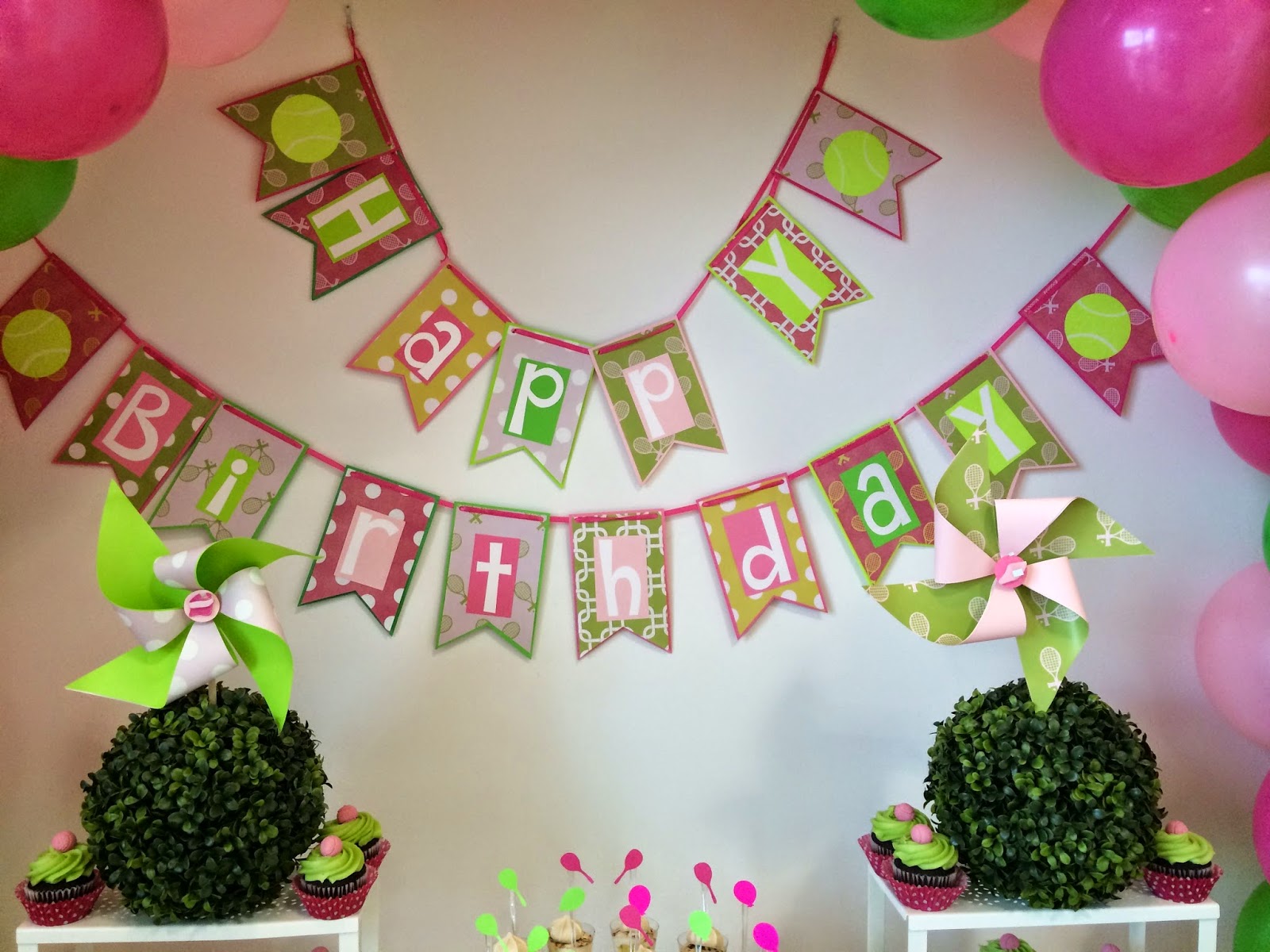 And of course, here's a family picture taken during the singing of Happy Birthday.  The girls were incredibly happy to have over 120 friends and family members present to make their celebration extra special.  We are so lucky and blessed to be surrounded by such wonderful people who took time out of their busy weekends to spend time with us.  We are also thankful for all the wonderful and thoughtful gifts the girls received.  Thank you, thank you, thank you!  We had a blast! 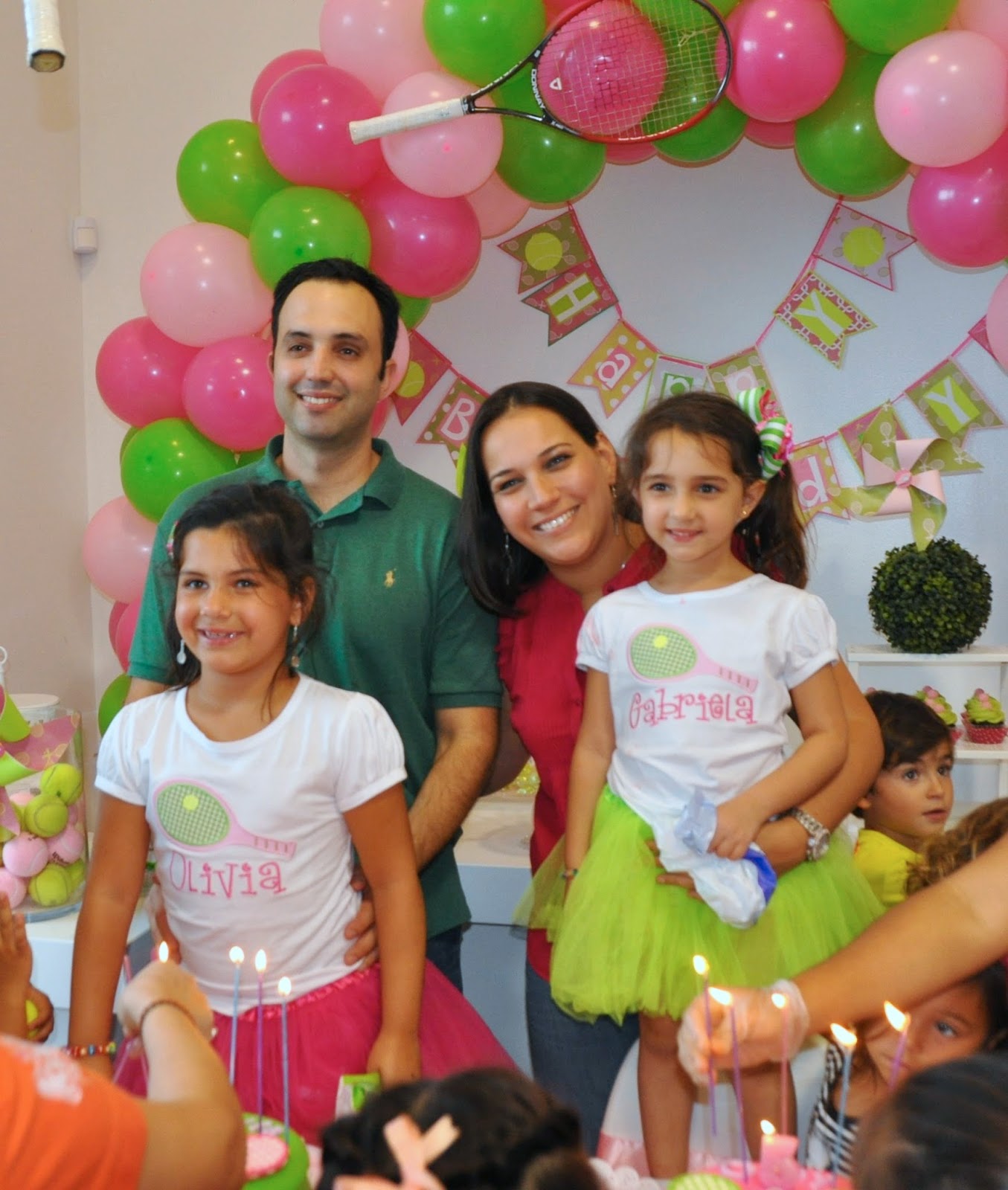