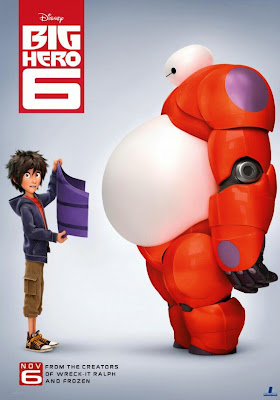 "Big Hero 6" is the latest Disney movie and even though I would argue that it wasn't advertised as much, it created enough commotion to be #1 at the box office this weekend.
I'm going to start by saying that this movie isn't as big as Frozen was around this time last year and even though it's a good one (with a great message too), it isn't as endearing as other kids' movies. Also, I don't think I would recommend this one for kids under 5 because the plot is a bit too complex for the very young ones.
The story revolves around Hiro Hamada, who is a very smart 13 year old kid with mad skills in robotics and other mechanical areas; in the beginning of the movie he is into "Bot Fighting" but his older brother Tadashi lures him into doing something "better" with his skill and convinces him to apply to a very well known robotics university. Once he decides to go for it, tragedy strikes and his life path changes drastically (I won't tell you exactly what happens as to not spoilt it!).  Along the way he meets Baymax, who is a "healthcare assistant" created by his brother; this character turns out to be the one who teaches him a valuable life lesson and also the one that brings him close to the other characters (which are great and very creative, by the way!).
Many twists and turns happen during the movie and Hiro becomes a robotics-genius-turned-superhero who develops a strong bond with the fluffy and lovable Baymax.
The movie features some wonderfully created digital images of my favorite city (San Francisco) along with some incredible animation and special effects.
I will warn you that it has many sad parts and my girls ended up crying for several moments and that is why I wouldn't recommend jumping into it with kids who are younger than 5.  Also, I think this movie is more appealing to boys because of the super hero component but it's definitely a good family movie too!
This one gets 3 out 4 stars from me! ;)
Posted by Stories of a Happy Mom at 10:19 PM