**Disclaimer: this post is about my personal experience with breastfeeding and in no way is it meant to offend or diminish any mother who isn't able to or decides to forego breastfeeding. Please know that I respect ALL mothers and stand by the "fed is best" motto, however, I wanted to share my breastfeeding journey and document it for my children as I do many of our most remarkable experiences**

Getting pregnant with Oliver was one of the biggest surprises of my life; he came unannounced and completely unexpected but totally ready to rock our world! (I know I have said this a million times!)
With the unescapable fact that I'd be a mother of three also came great opportunities to do better than I had in the past and one of the challenges I set for myself was to breastfeed my child or at least try a little harder than I did with my first two daughters.
Breastfeeding was always a taboo subject for me; I either avoided it because I had failed in the past or simply became defensive (and sometimes offensive) because it made me uncomfortable.  I clearly remember this post I wrote more than 6 years ago when TIME magazine had a cover featuring a mom breastfeeding her 4 year old; for some reason the cover made really mad and I thought that mom was delirious for practicing "extended breastfeeding"...it's one of those times I said "I would NEVER do that!"...
During my pregnancy with Oliver I spent many hours reading and doing research about breastfeeding and overcoming the many hurdles that come with it; it was clear to me that while it wasn't impossible, succeeding was going to take a lot of dedication and discipline on my part so I decided to take it one day at a time.
I made the decision of not being "too hard" on myself if it didn't go well but I was also set on not being "too easy" either because the accountability that was needed could only come from ME!
The first few weeks were as challenging as expected (or maybe even more!); bleeding and sore nipples, engorgement, leaking, boob pain.. you name it, I had it and it was very discouraging. Every possible doubt crossed my mind: "can I do this?", "is my baby eating enough?", "should I feed him formula instead?", "why do I put myself through this?"; those were just some of the questions I asked myself on a daily basis and I cannot tell you how many times I was so close to throwing in the towel...
But somehow every time I was ready to give up, I saw a glimmer of hope in the fact that Oliver seemed happy and thriving, and slowly but surely I was feeling more comfortable in my own skin and in my job as the sole provider of nutrition for my baby, it felt good! 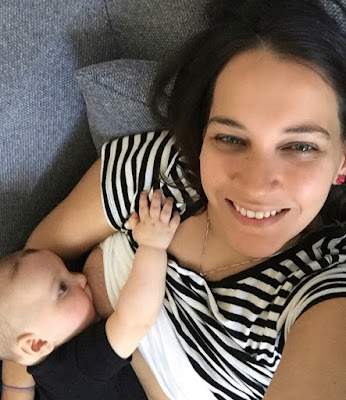 After 3 months (my first mini goal) I was sure I had succeeded and expected nothing but smooth sailing; we had already found our rhythm and he was getting more than enough nutrition from me, I could read his signs and we found our favorite breastfeeding positions, even my wardrobe was breastfeeding friendly and I was so proud of myself for sticking to it. At this point I felt more than accomplished since I had already gotten way further than I ever imagined and had reached my personal goal.  I decided to keep going since it was really so easy and practical, and in the blink of an eye, I reached the 1 year mark! But then, right around that time, I got an evil mastitis case; it started with a mild fever and it escalated to huge lumps on my breasts and pieces of nasty clogged up milk that I had to painfully suction out of me.. it was terrible..
As I was convinced that mastitis was the end of my journey, my doctor suggested I kept going and even hinted at the fact that using Oliver for suction would make this nasty mastitis go away quicker.. and so I did...and it did! My mastitis cleared within a few days and we were back on the road! 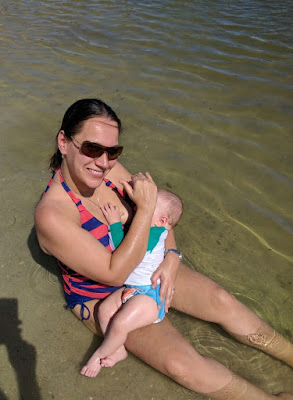 During the next year, I breastfed Oliver at the oddest places and even got over my fear of "exposing" myself and showing too much skin in public. It was liberating to know that I could do this whenever, wherever, because feeding my baby was my number one priority and I didn't care about what anybody thought. I figured that's how so many breastfeeding advocates feel and exactly why so many moms feel so free when using their bodies for what they are intended.
Once we reached the 2 year mark I started to get the "you're crazy" kind of comments; some people even suggested that I was "sick" for breastfeeding a "giant" and even mentioned that I was doing more harm than good for doing this. These comments came from the most loving and caring people and honestly I didn't take anything personal because I was once in that bunch; years ago I would have been the person to say that and I probably did without realizing how personal this decision is.
In November of last year (Oliver was already 2 years and 2 months), I took a week long solo trip to Europe so I decided to take that opportunity to wean Oliver. Because I was still producing so much milk by then, I took a portable breast pump as a precaution (please note that up to this point, I had never pumped since Oliver always fed "straight from the source") to relieve some of the pain associated with weaning.  During my trip I "pumped and dumped" twice a day and Oliver did remarkably well while I was away.... I was done!
To my surprise my milk didn't dry up and as soon as I got back home Oliver demanded a feed and it was like I never went away; my body kept producing all the milk he needed and for some reason I was "ok" with the fact that the weaning wasn't happening as planned. 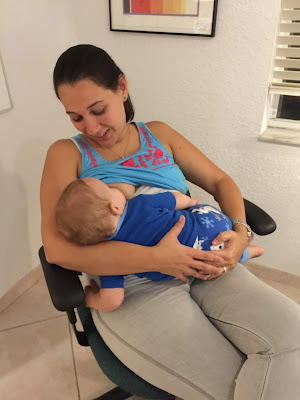 So to make a long story short and spare you more details than what I've already given out, Oliver is 2 years and 9 months today and we are STILL breastfeeding; granted it's only once or maybe twice a day but I'm still baffled to have made it this far. Never in a million years did I imagine that I would achieve this incredibly goal and I am so proud for giving myself the chance to prove that I could do it; more importantly I am happy that my son got the best he could get from me.
But as proud and happy as I am to have made it this far, I know the end is near and I am at the point where I really want it to end.  Nothing will ever erase the bond and love that breastfeeding gave us and I have a new level of admiration for all the mothers that overcome the hurdles and succeed at this difficult task.
Breastfeeding Oliver for this long has been such a blessing for our family; I was able to provide my child with good nutrition and I was also able to teach my girls resilience and perseverance. I was able to prove myself that discipline goes a long way and most importantly I was able to tear down all the stigmas that I had created. I am sorry for the times I rolled my eyes at moms who breastfed in public and for the times that I felt uncomfortable or offended by the most natural of motherly acts. I thank everyone who supported me through this journey; all my breastfeeding advocate friends that taught me so much, my husband who pushed me when I was ready to give up, my daughters who learned that breastfeeding is normal and beautiful, my family who cheered me on even when they thought it was time to quit,  and my wonderful son who loved me even when I cried as my nipples bled during the first few weeks.
And to any mother out there that wants to give breastfeeding a try, please know that it is HARD and it takes a lot of discipline and dedication but once you get the hang of it, it is among the MOST rewarding and beautiful things you could do for your child! Also know that choosing to breastfeed (for however long you wish) is an extremely personal decision and it should never be questioned by anyone.
Happy Breastfeeding! #normalizebreastfeeding 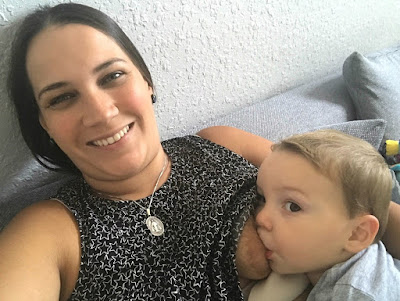