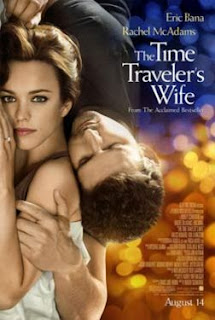 Today I went to see The Time Traveler's wife, which has been out in theaters since August 14th. I must say that I went in to see the movie with a bit of skepticism since I'm not into science fiction and often dislike movies that I know are unrealistic and impossible....
Well, to my surprise, the movie was actually pretty good and very well thought... The storyline was well organized and the characters were rather engaging. It was romantic, funny, cute and ingenious at the same time... I really enjoyed it. Even Iggy liked the movie and he often thinks that romantic dramas are usually bad... that was first!
I thought Eric Bana and Rachel McAdams played such great roles and their portrayal of the characters was great; they make such a cute onscreen couple and had great chemistry. Also, although the movie is based on something as impossible as "time traveling", it is so engaging that at some point the viewer believes that it is a true story...all in all a great movie!
Posted by Stories of a Happy Mom at 5:33 PM